Make no mistake: The fight for reproductive rights is about human rights. People should have the right to decide what happens to their bodies. Period.

The conversation should have ended there, years ago. But of course, it hasn’t. And since our humanity isn’t enough to guarantee that right, maybe the economy is? Countless studies and data show that limiting reproductive health care access has a major financial impact even on those without uteruses — it hurts individuals, their families, their employers, and the economic welfare of the entire country. 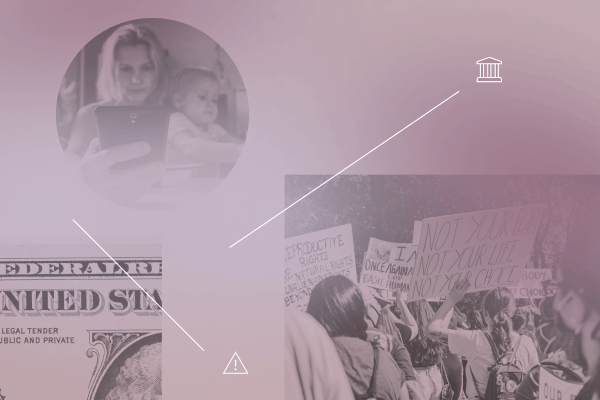 In fact, abortion access is so critical to the economy that economists are basically unanimous on the topic: “Economists as a whole don’t have disagreement about this,” one professor told the New Yorker. “This is not a question about the minimum wage — if you bring that up, then they’ll start arguing. But, if you ask about the role of childbearing in women’s lives, they don’t argue on many of the facts.”

Still don’t believe us? (Jk, of course you do — but you probably know someone who doesn’t.) Let’s look at the numbers.

For people seeking (and / or being denied) abortions

Denial of abortion access keeps women and other people who can give birth in poverty. In 2020, demographer Dr. Diana Green Foster published the landmark Turnaway Study, a longitudinal study started in 2007 that tracked women and the long-term effects of having (or not having) abortions on their lives. It found, among other things, that women who were unable to get an abortion were four times as likely to remain in poverty years after having the baby.

Earlier this year, the National Bureau of Economics analyzed data from the same study and found that women who were denied abortions experienced a 78% increase in delinquent (aka overdue) debt compared to what they owed before they got pregnant, and they remained in financial distress for at least five years after.

That’s probably because women in the study who were forced to give birth (aka were denied abortions) saw an increase in child support of a paltry $20 per month, but “zero increase in post-birth income, despite adding a household member” — a household member who costs an average of  $4,300 to deliver (as of 2015; $5,200 for cesarean births!) and $11,000 a year to raise. (Federal programs can only afford to subsidize 1 in 6 children’s care costs.)

And then, of course, we have to talk about the lack of mandated paid parental leave here in the US. Only 5% of the country’s lowest paid workers, most of whom are women of color, had access to paid parental leave in 2020. Even among the nation’s top 10% of earners, only 36% have access to paid parental leave. So more births could mean weeks of lost wages — if the cost of child care doesn’t force them to leave the workforce completely. And even if a person does have paid leave, their income doesn’t walk away unscathed: Research has found that women who return to work after having a baby face a bigger pay gap than women overall.

Access to health care in general — whether or not it’s provided as an employee benefit — isn’t just important for individual people: It’s also essential for employers who want to retain their team members. Research shows that access to health care increases a person’s likelihood of staying employed, and it’s especially true for people with uteruses and reproductive care specifically.

Abortion restrictions at the state level mean that people will need to travel across state lines to have abortions — even farther than they do now if states ban abortion outright. (Newsflash, banning abortion does not stop people from getting them.) That means longer absences from work, according to IWPR CEO Nicole Mason. It also means more employees forced to give birth: For every 100 miles a person has to travel, they’re about 25% less likely to be able to have that abortion. And that, of course, means more employees on parental leave, or leaving their jobs altogether (especially if they don’t have access to paid parental leave). Then: staff shortages and extra hiring and training costs.

Abortion bans can hurt revenue, too. See: back in March when a Texas legislator tried (and failed, thus far) to extort Citigroup, threatening to hold its underwriting business in the state hostage unless it reversed its employee policy on covering abortion travel. (They’re not the only ones, of course. Here’s a list of companies that are now explicitly covering employees’ abortion-related expenses.) When governments can cut off revenue streams for attempting to close the access gap, that makes the policy itself bad for business.

For the economy in general

This should be obvious, but women comprise 50% of the population here. (That’s not even counting non-binary people and trans men, both of whom are impacted by abortion restrictions, and whose numbers are growing with each generation.) And despite fluctuations caused by the pandemic, they still comprise roughly half the workforce. Restricting reproductive rights is an issue that will greatly impact the US economy.

The Institute for Women's Policy Research has estimated that abortion bans and other reproductive health restrictions cost state and local economies $105 billion annually by reducing people with uteruses’ ability to participate in the workforce. If all state-level abortion restrictions were to be eliminated, employed women would earn $101.8 billion more.

The IWPR research also found that, if all state-level abortion restrictions were eliminated, over a half million more women would enter the labor force, and their participation would mean an additional $3 billion in profits and a 9.12% private-sector earnings growth nationwide — and that’s not even counting the potential contributions of others with uteruses.

Reproductive health access, including abortions, relieves strain on public resources, as well — according to one American University analysis, because its availability reduces the likelihood of poverty, it also decreases the probability that people with uteruses will require public assistance.

Abortion bans also dramatically increase mortality rates for people who seek abortions. After Roe v. Wade, deaths from legal abortions declined by 500% over 12 years. And a 2021 Colorado University analysis estimates that banning abortions would increase pregnancy-related deaths by 21% — even more for Black women, by 33%. As many, many economic studies have shown, rising mortality rates are closely associated with negative economic growth.

Let’s keep it real here — abortion bans will always impact the economically vulnerable the most. (Remember author Lindy West’s appearance on The Daily Show?) It’s not just the super-wealthy who will find ways to keep their access to reproductive health; it’s also people fortunate enough to work at companies offering abortion benefits. When an issue hits the poor and struggling hardest, it will increase the wealth gap — and inequality is already hurting the economy (and people) enough as it is.