Investors just can’t seem to catch a break, can they?

After a promising start to the second half of 2022, hopes for a positive quarter were dashed as inflation remained stubbornly persistent. Although it had stayed flat in July, month-to-month inflation rose by 0.6% in August, which led the Federal Reserve to raise rates by yet another 0.75% last month. Markets reacted harshly to the news, especially amid worries of lower corporate earnings and fears of an economic slowdown. As of the end of September, the S&P 500 is down 25%, the DJIA is down 21%, and the NASDAQ is down 32%.

As long as inflation remains high, the Fed will continue to aggressively raise rates. In fact, they’ve already signaled that more rate increases are on the horizon to fight inflation, even at the expense of economic growth. When the Fed raises rates, interest rates across the economy also rise. The average 30-year mortgage rate is now 7%, more than double what it was this time last year. (Here’s an eye-opening example of what that really means for homebuyers: In early 2021, you could get a $758,000 mortgage with a monthly payment of $2,500; today, that’s how much you’d pay each month for a $476,000 mortgage.) That said, while the costs of borrowing have risen, yields on fixed-income assets like certificates of deposit and US Treasury bonds are also higher.

The star of the show: A strong US dollar

Stocks and bonds may be down, but one major asset has soared: the US dollar. That’s thanks to rising US interest rates, a stronger economic recovery than other countries, and the dollar’s global status as the world’s reserve currency.

The Federal Reserve has raised rates to combat inflation faster and more aggressively than any other global central bank. As a result, US Treasury yields are at highs not seen for the last decade — close to 4% for the 10-year Treasury — and are attracting investors around the world who are seeking higher returns. Because other currencies are sold to purchase dollar-denominated assets like these, this kind of demand strengthens the dollar relative to those other currencies.

As gloomy as things may feel here in the US, our economic recovery is ahead of most other nations. Even the most developed nations are facing new challenges. This week, the UK’s new prime minister, Liz Truss, announced huge tax cuts, which sent the pound sterling down to a record low of $1.03 vs the US Dollar. The Bank of England then started purchasing long-term bonds to stabilize the pound. Year to date, the pound has fallen by more than 20% against the dollar, and the Euro has fallen by nearly 16%.

The US dollar also dominates global trade; it’s used in 88% of all foreign transactions. During political and economic uncertainty, investors still see the US as a safe haven of stability and liquidity. 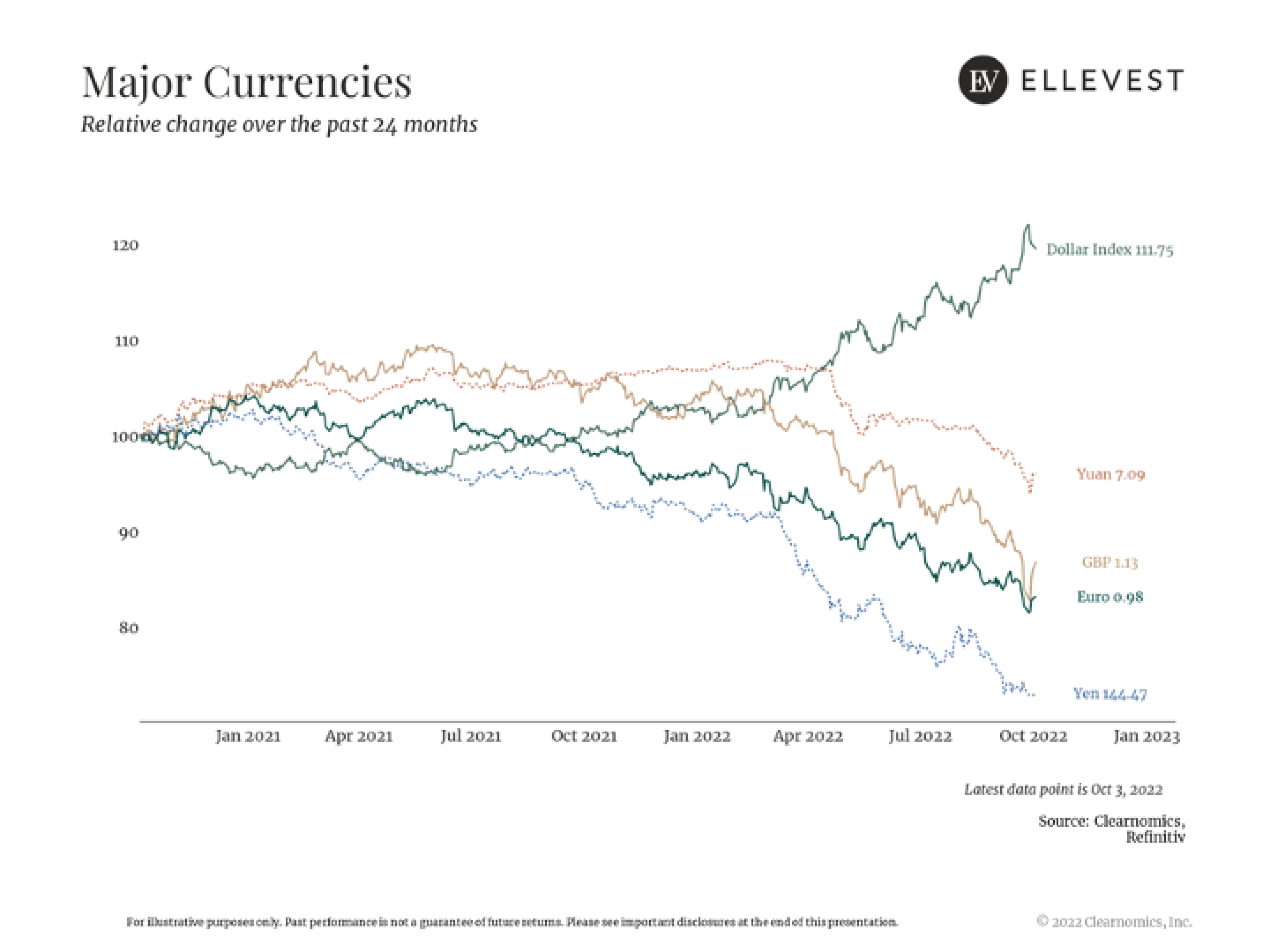 What a strong US dollar means for investors

A strong dollar may seem like a mighty good thing. And it is — especially if you’re traveling abroad, where your money will go further. But when it comes to economic developments, there are always two sides to a silver dollar (😏). A strong dollar hurts not only foreign companies, but also global US companies that make most of their money abroad: It makes US products more costly for people who live in other countries, which could hurt sales. On the flip side, a strong dollar makes foreign imports in the US cheaper, and that helps tame inflation. As usual, the challenge is in balancing the two effects.

At Ellevest, we believe in global diversification for long-term investing, and that means owning both US and international stocks — even if a strong dollar could impact their performance. Just like with the stock market, it’s nearly impossible to try to time and predict currency fluctuations and trends. We don’t know if or when central banks might raise rates more aggressively to match the Federal Reserve. We also don’t know if or when inflation in the US might begin to simmer down and decrease the pressure on the Fed to keep raising rates. Any of those may change the course of the dollar and its effect on your portfolios. Time in the market — through both its ups and downs — remains key to investing for the long term.

How Tax Loss Harvesting Could Help You Save on 2022 Taxes