How to Improve Your Money Mindset

Everyone feels financial anxiety, but the way women+ experience it is, from a cultural perspective, very much on purpose. From childhood, we’re conditioned to believe we’re bad at money. Bad at math. Bad at investing. Bad at saving. We buy lattes and shoes instead of houses. We’re risk-averse, so we miss out on creating generational wealth. We just need to lean in and hustle harder. 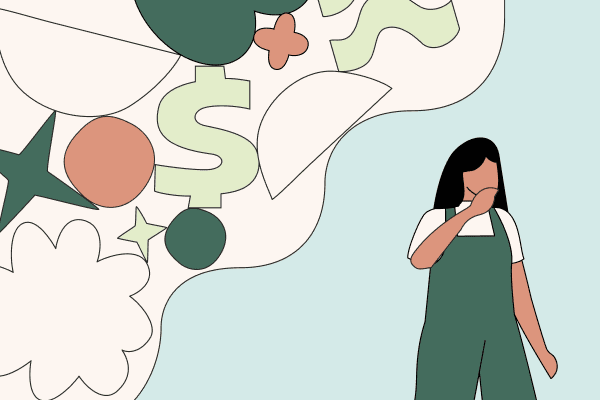 None of these lies are true, of course, but they’re what the world has come to expect, and they’re why so many women underestimate their abilities when it comes to money.

We know that money is women’s #1 source of stress, and that taking action with money is women’s #1 driver of confidence in achieving their goals. So consider — who might benefit most from women continuing to believe they’re bad at money? Surely not the society built to give some people a dollar to a woman’s 32 cents (or less)! Put another way: For anyone who isn’t a cis man, it’s not just nice to feel good about your financial situation — it’s a downright radical act.

That’s why financial wellness doesn’t begin and end with building good habits (your foundation) and creating a roadmap (your plan) to achieve your goals. It also involves cultivating a healthy relationship with money that helps you stay motivated and engaged. Here are a few tips for how to get started.

Unpack a lifetime of money myths (and triggers!)

If you’ve ever seen a therapist, you know that before you can even begin to heal, you’re going to have to retrace your steps — to understand how you got to the point where you sought therapy in the first place.

While financial wellness is definitely not therapy, it is a self-guided healing process, of sorts. That doesn’t just mean memorizing a handful of mantras. Far from it! Like any healing process, it has to start with recognizing all the toxic messaging and unhelpful habits you might have absorbed throughout your life.

It can help to start with your past:

Then, move on to thinking about the factors that govern your current money mindset:

It can also help to write these answers down in a journal so you can see how they relate to each other. Chances are, you’re going to start seeing some patterns.

Reinvent your financial self — and don’t keep it secret

By now, you’ve figured out where your money mindset got its start. Now it’s time to start rebuilding the mindset you want. A shorthand checklist for where to start:

Every mistake you’ve made, every bad feeling you’ve ever had about money — it’s not worth beating yourself up. You can’t do anything about those hiccups, and the past is a sunk cost. Don’t waste your time or energy on what you can’t control — focus on what you’re going to do about it now.

Here at Ellevest, we talk to a lot of women who think they’re failing just because they haven’t done everything yet. Whether you’re just starting to spend less than you make or celebrating a major milestone, every small win is something to be massively proud of. You’re doing. the. thing.

Those sexist, circular logic arguments listed above? The “women aren’t good with money, which is why they don’t have any” stuff? These lies might have affected your confidence.

But here’s the truth: Women+ aren’t “bad with money” — we simply don’t have enough of it, because we have been systematically kept from it. Women carry more debt, and it costs us more. We pay more for housing. We have to take more breaks from the workforce, limiting our earning potential. We pay pink taxes. We’re paid less. And we stop getting raises a whole decade earlier. The problem is structural, not individual — and certainly not because of some bullsh*t gender inferiority.

Most of the world is built by men, for men (including the stock market, which btw is why Ellevest exists), so take the blame off your own plate and start planning your glorious revenge: to thrive, even if only to prove them all wrong.

4. Make up with money

It’s not just possible to feel good about money — that mindset is in your reach right now. There are a ton of ways to get there, depending on what kind of framework makes sense to your brain. You could picture a Future You who’s already on top of their finances. Train your brain by slotting in money-related tasks right before you do something you love. Break free from a scarcity mindset by building your favorite little luxuries into your budget. (And keep in mind that you don’t have to do everything yourself! Don’t be afraid to outsource, if at all possible, stuff that gets in the way of your core values.)

Also: Buying the f**king latte will not crash your million-dollar dreams. Buying yourself things you want is not selfish. Trust the plan you set out for yourself, because you built it to work for you. Eventually, that’s going to start feeling great.

5. Practice talking about it

There’s just so much data out there about how talking about money makes your relationship with money — and with the people in your life — better. It can expose income inequality at work. It makes for happier romantic partnerships and better marriages. It helps you learn from one another. And it creates solidarity among friends by removing the Instagram-colored glasses — and giving you opportunities to cheer each other on!

It may not always be easy or comfortable, especially in the beginning. But it’s worth it.

Changing how you think about money is a huge undertaking, but you’re here — give yourself a pat on the back. If you’re just starting out, that mountain might be looking mighty insurmountable right about now. However — and we know this sounds like a Confucius-y platitude, but it’s true! — any step forward, no matter how small, is still a step forward. This is why goal-tackling strategies like the snowball method are so popular: Finding a bunch of little wins in the beginning can be a much easier, less stressful way to motivate yourself and make progress than attempting to radically transform your circumstances overnight.

The secret is simple: dive in. You don’t have to know everything or feel totally comfortable to get started. You can start now, start small, and learn as you go.

Improving your money mindset won’t be instantaneous. It will probably be messy! But you’re making order out of the chaos, and taking that first step is the beginning of a brighter, more confident future — for your money and for you.

What to Do if Dealing With Money Feels Overwhelming