5 Women in Finance Who Made History by Being the First

We’ve said it before — every month is Women’s History Month at Ellevest. Celebrating history-making women (that includes you) is kind of our thing — 365 days of the year.

The numbers have never been in women’s favor — there are few industries as white and male as the finance industry, historically speaking and today. Plus, women founders face monumental systemic challenges. So here are five women who give us hope (and 🔥 quotes). They (and so many others) have paved the way for Ellevest and this community to thrive by being brave enough to be the first. 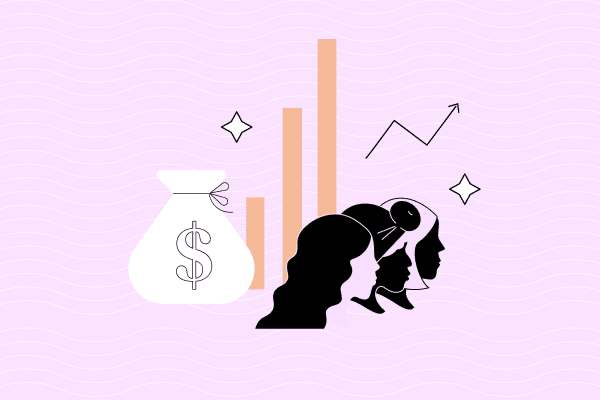 The first woman to: Buy a seat on the New York Stock Exchange

The backstory: After she asked her famous investor friend how to find a job that would pay her as much as a man, Siebert decided she wanted a seat on the NYSE. But she needed a “sponsor” to secure her seat — nine men turned her down before someone gave her a yes. (Talk about perseverance.) She bought her seat on the exchange in 1967 and went on to start her own brokerage two years later. But she was frustrated to remain the only woman admitted to membership for almost a decade. Later in her career, she donated millions to help other women get their start in business.

Fun fact: She often showed up to public events with her Chihuahua, Monster Girl, and a successor, Monster Girl II. She told everyone they were “not intimidated by the big dogs.”

The first women to: Take a company public with two women co-founders

The backstory: Heather Hasson and Trina Spear got the idea for their company, FIGS, after Hasson was grabbing coffee with a nurse practitioner friend who told her that she spent 16-hour days wearing uncomfortable scrubs. Hasson and Spear later learned that a lot of health care workers had to buy scrubs themselves, which were usually sold at strip malls far from the hospitals where they worked. They launched their direct-to-consumer line of health care wear in 2013. Sales reached $263 million in 2020, and the women took the company public a year later. Camera moment: They rang the bell on the stock exchange surrounded by nurses and other health care professionals.

Fun fact: Health care is one of the fastest-growing employment industries among women. (No surprise that 83% of FIGS customers are women!)

The “whoa” quote: “My lens was, what problems can I solve and how do I make this world better? I wake up every single day thinking about health care professionals and: how do we support them, how do we empower them, how do we celebrate them.” – Heather Hasson

The first Black woman to: Run a Fortune 500 company

The backstory: Forbes once called her “a veteran of corporate evolution.” Rightly so. She’s widely credited with turning around the then-creaky ship that was Xerox, having been promoted in 2009 to become the first Black woman CEO of a Fortune 500 company. (She started out as an engineering intern in 1980 at the age of 19. Talk about climbing the ladder.) Burns went on to serve as Xerox’s CEO for six years and, eventually, chair of the Xerox board.

The “whoa” quote: “The fact of the world, particularly the structures in the world … has been designed and perfected around a white male ideal. We as non-whites are kind of talking our way in, occasionally, but really don’t ever fit. This is the problem we have to solve.”

The first woman to: Become a self-made millionaire

The backstory: The daughter of enslaved people, Madam C.J. Walker — born Sarah Breedlove — started her hair care line with an investment of just $1.25. She grew the business by selling her products door-to-door and giving demonstrations at churches, and eventually, she employed more than 40,000 Black women. Walker is also remembered as an activist and philanthropist: She gave huge sums to civil rights organizations and helped fund the construction of an Indianapolis YMCA.

Fun fact: To distinguish her real-deal product from the wave of copycats that followed, Walker put her image on every package. And when her marriage ended in 1912, she insisted on keeping her husband’s name, saying she was the one who’d made it famous.

The first woman to: Build a “unicorn” dedicated to women’s and family health

The backstory: Maven Clinic, the largest virtual clinic for women's and family health in the world, announced in August 2021 that it had closed a $110 million Series D fundraising round — bringing the value of the company to more than $1 billion and officially making it a unicorn. Ryder founded Maven Clinic after her friends started having kids and she saw the limited support provided to new mothers, especially for those without employer-sponsored paid parental leave programs. Today, Maven helps women and families with everything from fertility treatment to pediatric care, through a combo of telemedicine and care advocates. In her fundraising pitch, she tells investors that Maven knows what women and parents want when it comes to health care — and emphasizes that the support they provide helps employers retain parents in the workforce. (It worked on Oprah. Nbd.)

Fun fact: When she was a journalist, Ryder ghost wrote the memoir of former US Treasury Secretary Hank Paulson, which covered his experience during the 2008 financial crisis.

The “whoa” quote: “In the very early days, it was a struggle just to get people to understand that there’s even a problem. It’s hard when there are mostly male investors, when a lot of those investors are probably not on the normal health plan that most Americans are on, and when society isn’t talking about things like IVF, fertility, miscarriage, and postpartum depression.”

Here’s to these women

And here’s to all the women who follow in their footsteps, too, widening the path for a titanic amount of “firsts” to come.

You may have noticed that we linked to Investopedia.com for the definitions of a seat on the NYSE and start-up unicorns. FYI, Investopedia (“Solicitor”) serves as a solicitor for Ellevest , Inc. (“Ellevest”). Solicitor will receive compensation for referring you to Ellevest. Solicitor will be paid $10 when an individual activates a membership. You will not be charged any fee or incur any additional costs for being referred to Ellevest by the Solicitor. The Solicitor may promote and/or may advertise Ellevest’s investment adviser services. Ellevest and the Solicitor are not under common ownership or otherwise related entities.

The information provided should not be relied upon as investment advice or recommendations, does not constitute a solicitation to buy or sell securities and should not be considered specific legal, investment or tax advice. Investing entails risk, including the possible loss of principal, and there is no assurance that the investment will provide positive performance over any period of time