How to Stand Up for Paid Family Leave

We will take every opportunity to advocate for public policies that level the money playing field for women — including the Paycheck Fairness Act and mandated paid family leave — as well as policies that help improve the environment. - Let’s Disrupt Money

It’s a policy often described as a “a no-brainer.” Paid family leave — the ability to take a break to take care of a baby or an ailing family member, or to tend to your own health — is good for families, good for women, and even good for business … but in the United States, it’s still not a thing. It’s time to disrupt money by standing up for paid leave.

So, what’s the deal with paid family leave in the US?

On the national level, the Family and Medical Leave Act was passed in 1993; you’re allowed to take up to 12 weeks off to have a baby or care for an ill family member without getting fired … but your company’s allowed to stop paying you entirely while you’re gone. So the law’s less than helpful if you can’t afford to go without pay.

But right now, only 13% of people working in the private sector have access to paid family leave through their employer, and that number drops to 6% of low-wage employees. Which means that 114 million people are left without even a day of family leave. One in four new moms goes back to work 10 days after giving birth.

The good news: A bunch of states passed laws that will go on the books in coming years. And more companies are offering benefits (even to hourly workers, which is kind of new). The bad news: Rules vary from company to company and state to state, and there’s evidence that current paid leave programs aren’t treating people of color , LGBTQ families, dads, or adoptive families fairly. A federal law could fix that.

Is this just how things have to be?

Um, no. Make that hell no. Only two countries in the world don’t offer some form of government-mandated paid family leave: The United States and Papua New Guinea.

There’s a lot at stake. Paid leave is associated with so many benefits to babies and kids, it sounds made up: lower mortality rates and higher vaccination rates, healthier kids, more and longer breastfeeding, and faster recovery from illness. Wow.

… and for mothers, fathers, and caregivers

And then there’s what’s at stake for women. Women who get paid leave return to work more. And the New York Times reports that “Women who took leave and returned to their jobs worked 15 to 20 percent more hours during the second year of their child’s life than those who did not take leave … and their hourly wages increased about 5 percent.” Meaning: Moms with paid leave come back to work, work more, and get paid more than moms who don’t. They’re also less likely to need public assistance. And the benefits aren’t just economic: Paid leave has beneficial effectson mothers’ mental health, too.

Paid leave also makes for better dads. According to the National Partnership for Women and Families , “Fathers who take 2 or more weeks off after the birth of a child are more involved in that child’s direct care 9 months after birth than fathers who take no leave. Involved fathers also promote children’s educational attainment and emotional stability. And a father’s involvement in a newborn’s care in the first 6 months can mean both mother and baby sleep better.” Nice. 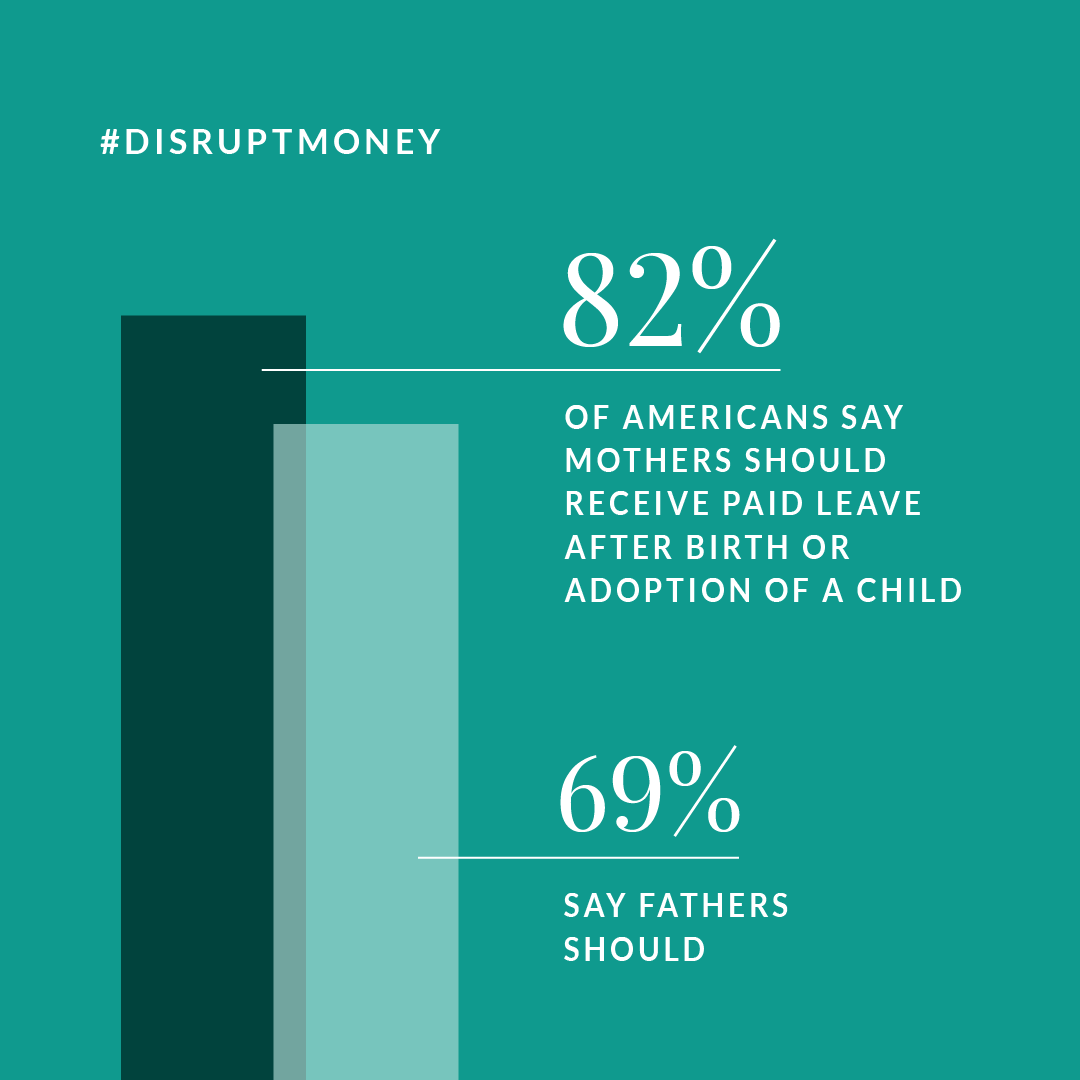 In California, paid leave gave economic options to people giving unpaid care to family members — the majority of whom are women — allowing them to work full-time or part-time.

The cost of replacing employees is high: Like, 150% of their salary high. And according to accounting firm KPMG, paid leave is so good for retaining employee that if companies offered 16 weeks (yes, 16 weeks!) of paid maternity leave, they could save an estimated $19 billion a year … plus, they’d “retain the knowledge and experience of these women with positive consequences for productivity and effectiveness.”

How to push the US toward paid family leave

Even more good news: There’s bipartisan support for paid leave. Polls show that 88% of Democrat voters and 71% of Republican voters approve of “requiring employers to offer paid leave to parents of new children and employees caring for sick family members.” So this is looking like a win-win-win, right? Here’s how to get loud about it:

Let’s Disrupt Money … by Spending It on Women