Here’s What History Could Have Looked Like with More Women

We spend a lot of time thinking about what gender equality could do for our future. But have you ever stopped to think what it could have done for the past? 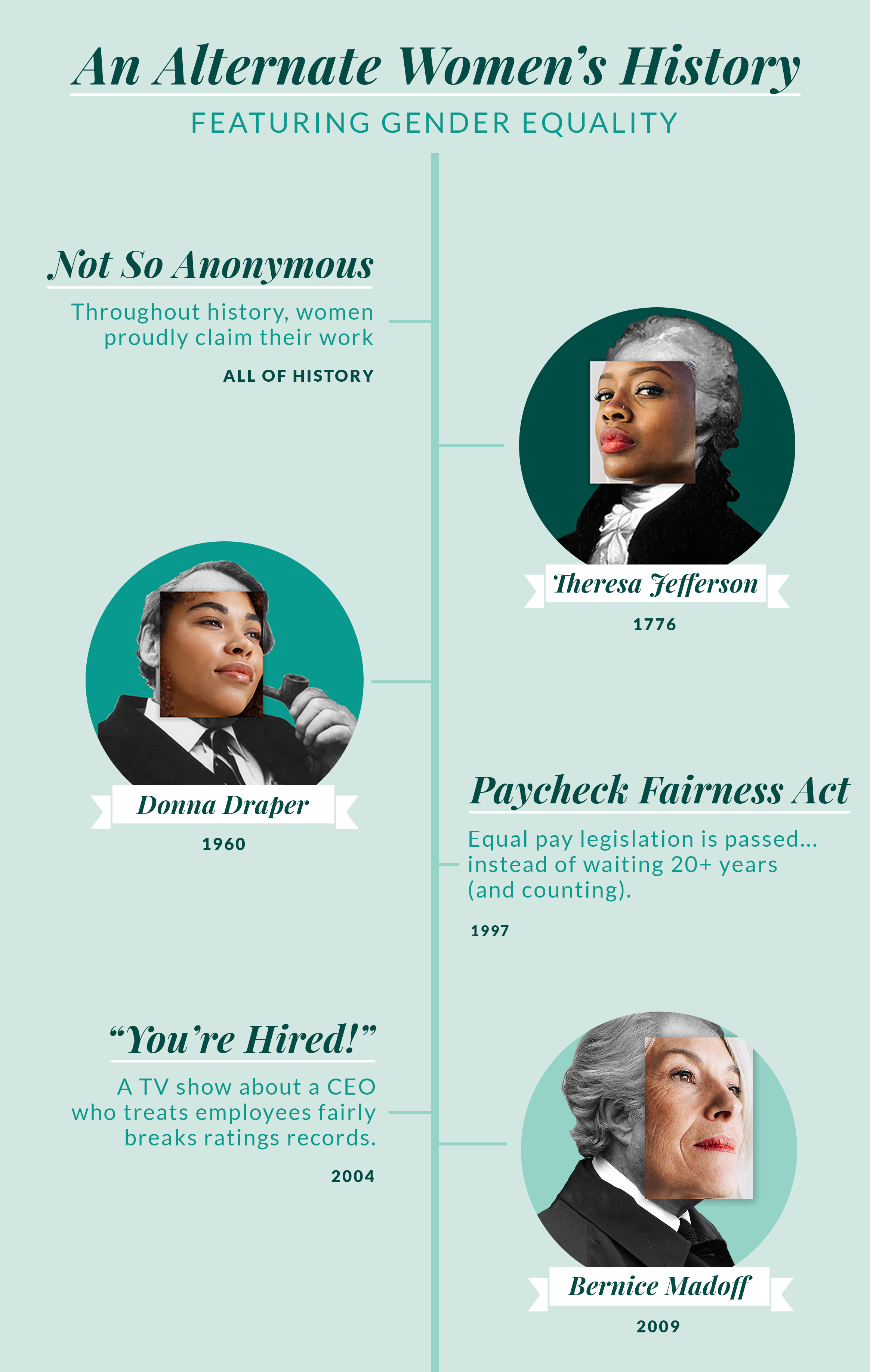 Maybe the Constitution would have included an equal rights amendment if a Schuyler Sister had been in the room. Maybe 2008 would have been just another year if the Lehman Brothers had been the Lehman Sisters. And what if there had been some Mad Women along with the Mad Men?

This Women’s History Month, we’re taking a deep dive into the past to think about what could have happened if more women had been in power during key moments in history.

1776: The Constitution, but make it inclusive

The year: 1776. The scene: Lots of white men in wigs sitting around the table writing the Constitution — which, btw, still doesn’t guarantee women equal rights. (“We hold these truths to be self-evident, that all MEN are created equal.”)

If the Founding Fathers had listened to a woman or two (Angelicaaaaaaa...work!), maybe we wouldn’t have needed an ERA.

To state the obvious: Women in positions of power are more likely to advocate and fight for issues that are important to — you guessed it — women.

What if Madison Avenue conference rooms had had more Peggys and fewer Don Drapers during the Mad Men days? What if women had been in the room making advertising decisions for the last 50 years? We’d like to think there would have been a lot less happy housewife BS and a lot more #DreamCrazier campaigns (hell yeah, Nike).

Despite the fact that women now make up 46% of the advertising industry, they still only account for just 11% of creative directors. Let’s change that, together.

Yes, now-disgraced financier Bernie Madoff began his Ponzi scheme THAT long ago. We’ve got a feeling that a Bernice Madoff maybe wouldn’t have stolen billions of dollars from her clients over a period of three decades.

After all, research suggests that more women in leadership positions could equal fewer corporate crimes.

The year: 1997. The scene: The Paycheck Fairness Act has hit the floor of Congress for the first time. And unless you’ve been living under a rock, you’ve most likely heard of this piece of legislation.

Probably because it’s been proposed 12 times over the past 20 years. The purpose of the bill is to add eight additional protections to the Equal Pay Act of 1963 and the Fair Labor Standards Act of 1938.

Surprise (not): Women legislators are more likely to fight for issues that matter to women. But we haven’t exactly had equal representation in that arena, sooo.

Imagine “The Apprentice” with Donna at the head of the table instead. (Go ahead, imagine it. We’ll be here when you’ve shaken the mental image.)

But that’s a TV show we’d totally tune in for: Women are more likely to hire other women ... and promote them, too.

Imagine it’s 2008, but it’s the Lehman Sisters, rather than the Lehman Brothers, in charge.

Impending economic doom? Or just another year, Britney drama notwithstanding? We think things could have been very different if the financial world had had more women leaders. (It wasn’t diverse in 2008 … and it’s still not.)

Why? Well, for starters, women are better investors at both an individual and professional level. In fact, a report called “The Lehman Sisters Hypothesis” notes that men fund managers lost twice as much as the women did during the height of the financial crisis.

Shoutout to Christine Lagarde of the IMF for coining “Lehman Sisters.” We stan.

The year: 2018. The scene: A dangerous and disorganized hot mess of an island festival is summed up by a viral picture of a sad sliver of cheese with a side of bread in a styrofoam container.

But what if that same new venture had been run by Lily McFarland? There’s lots of research to suggest that women are more successful start-up CEOs. And lots more to show that women executives are much less likely to commit corporate fraud.

All of history: Not so Anonymous

The year: All of history. Can you imagine if the hundreds of women artists, poets, writers, performers, journalists, etc. had used their name, rather than Anonymous? Young women need someone they can point to and say, “She looks like me. If she can do it, I can too.”

We women can no longer be written out of history. We are here, and we’re not going anywhere.

You may or may not have noticed that we linked to https://www.investopedia.com/ for information about Bernie Madoff's three decade long ponzi scheme. FYI, Investopedia (“Solicitor”) serves as a solicitor for Ellevest, Inc. (“Ellevest”). Solicitor will receive compensation for referring you to Ellevest. Compensation to the Solicitor will be $10 per membership activated. You will not be charged any fee or incur any additional costs for being referred to Ellevest by the Solicitor. The Solicitor may promote and/or may advertise Ellevest’s investment adviser services. Ellevest and the Solicitor are not under common ownership or otherwise related entities.