Ellevest’s investing forecasts exist to help you understand whether you’re on track to hit your money goals. Put another way, they can help you decide how much to invest now in order to help you retire, buy a house, start your own business — whatever it is — in however many years. Seems like a pretty big deal. 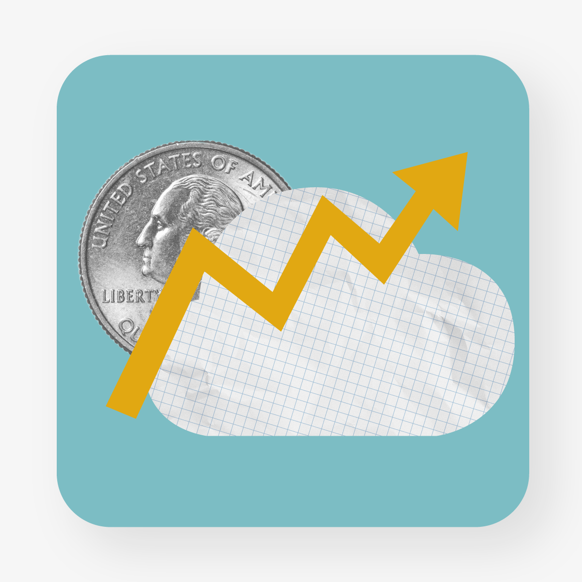 Important thing: Nobody knows what’s going to happen in the investing markets tomorrow. Including us. But it’s totally possible to dive deep into history and research in order to understand the market’s past and make informed forecasts. And that’s exactly what Ellevest’s online investing platform does.

We believe it’s our responsibility to make our forecasts as realistic as possible.

What exactly do you mean by “realistic”?

We mean forecasts that take into account relevant info about you and your real life — along with research on past market behavior, inflation, taxes, and thousands of algorithm-driven simulations. (More on how we do that in just a sec.)

Specifically: Ellevest’s forecasts show the amount of money we estimate you’ll have (or more) in 70% of market scenarios if you follow the plan we suggest for you. To put that into perspective, some other investment advisors only show how much you’ll have in 50% of market scenarios. (That means their projections might be higher, but their level of confidence is lower. They’re as confident as … a coin flip.)

And we don’t stop there — Ellevest’s investing platform will show you a range of possible outcomes. For example, here’s a projection for a hypothetical 25-year-old woman who starts investing $500 a month for her retirement*: 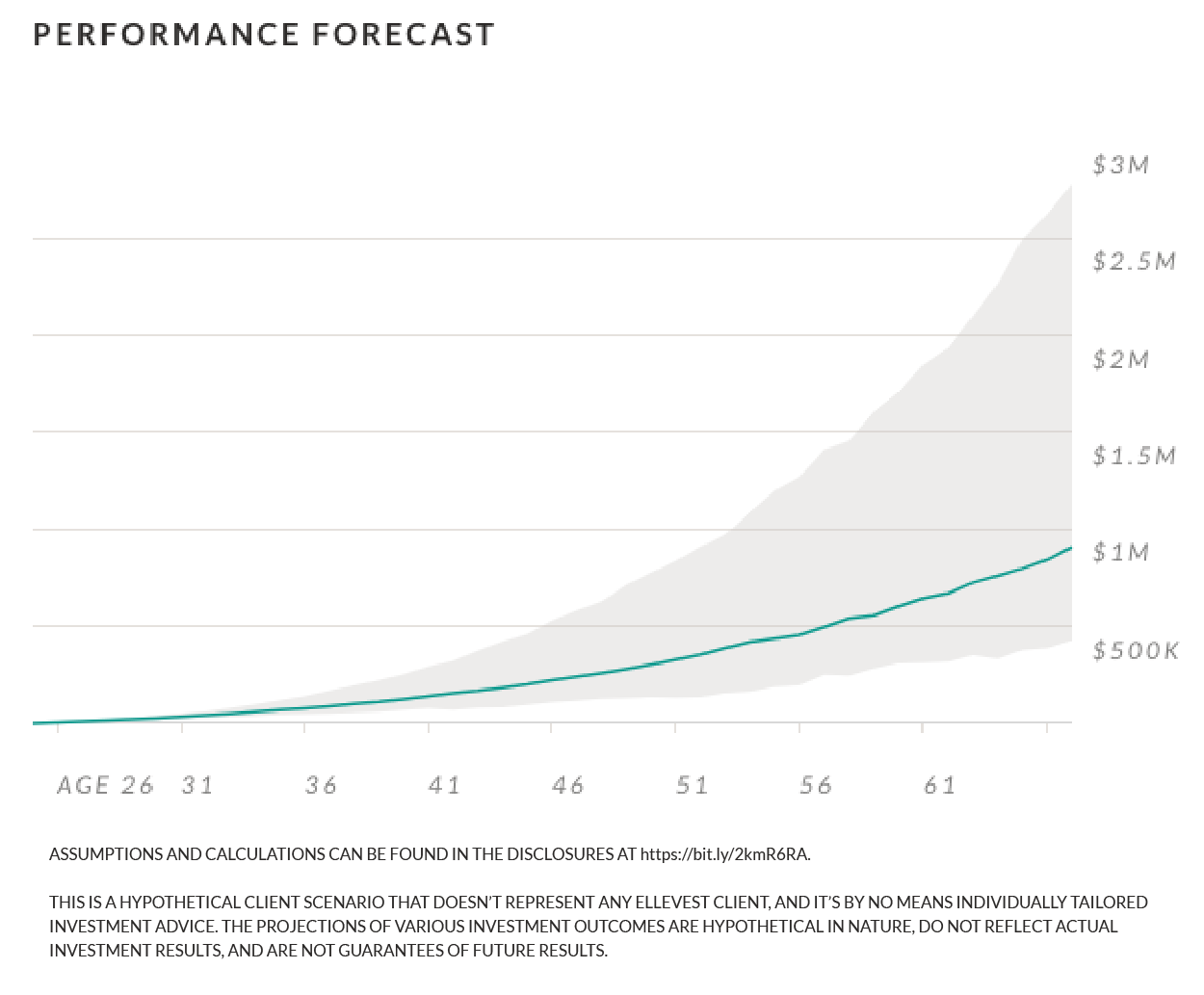 How we build forecasts

We start by asking some things about you — like your age, income, and gender identity. Those things all come together to help us understand your future earning potential. Then we ask you about your goals — namely, what they are and when you want to hit them. That tells how long you have to invest.

Why gender? We’re so glad you asked, because it’s our original reason for being. On average, women are paid less, see their salaries peak much sooner before retirement, and take more career breaks. All this affects how much we’re likely to get paid throughout our lives — which affects how much we’ll be able to invest in the future. (This, btw, is part of why women retire with two-thirds as much money as men, even though we live six to eight years longer. The algorithm we use to recommend an investment plan for you is designed to help address that gap.)

Maybe you’re already a high earner, or you at least feel like you’re on a good path to earn more than the women’s average. People do, and we love a go-getter around here. But other people’s biases aren’t under our control — and that includes the people who make decisions about how much we get paid and when we get raises. So we think that playing it conservative with your forecasts here can only help.

Unfortunately, there isn’t enough reliable data out there (yet) for us to build a projection model specifically for non-binary people. So if you identify as non-binary, Ellevest will use the women’s salary curve data to build your forecasts — given the choice between the “men’s” and “women’s” curves, it’s more conservative to use the one that takes societal biases into account.

The next piece of the puzzle is the Wealth Forecasting Engine (WFE) from Morningstar Investment Management. It uses a computer-based mathematical technique called Monte Carlo simulation to calculate a range of potential outcomes and the probability of each one happening. This is how we build that graph shown above.

In order for the WFE to work its magic, it uses certain capital market assumptions. Put simply, these are expectations about how investment markets and the economy might act in the future. The assumptions we use are backed by years of market observations, research, and market and economic analysis. They include how risky different types of investments might be, how much we might expect them to earn in returns over time, and how they’ll behave relative to other types of investments. They also include expectations about how certain economic factors, like inflation, might behave.

Using these assumptions, the WFE simulates thousands of potential future scenarios. And yes, that includes severe market downturns similar to October 1987 and the 2008 financial crisis. In fact, the WFE assumes events like these have a 1% chance of happening — which is ten times higher than the assumptions used by some other forecasting engines. That’s because 1% is how often these events actually happened in the past.

That’s a big difference. Huge. And again, it may make our forecasts lower than some others, but we aren’t here to overpromise and underdeliver. We’re here to give you forecasts that you can actually use to plan your life.

We also include the impact of taxes and fund fees (sometimes called expense ratios) on how much money we believe you’ll end up with because … um … they’re real costs? But no, not every investment advisor includes them in their forecasts.

The IRS requires investors to pay taxes on interest income, dividends, and any money you make from selling your investments that year (aka “realized capital gains”). A forecast that doesn’t account for taxes may look bigger, but it’s an inaccurate picture. Remember the let down when you got your first paycheck back in high school and realized that taxes meant you had less money than you expected? We don’t think you should be surprised like that again.

Then there’s the Ellevest glide path — aka how we plan to shift the mix of investments in your portfolio as you get closer to the end of your goal’s timeline. We do that to help you sail smoothly (get it — a “glide” path?) into retirement, your new home, your business — whatever your goal may be.

Some other advisors may use glide paths, too, but the forecasts they show you don’t actually include that plan. They make it seem like your portfolio will stay the same until your goal date — which can make a big difference if the plan is to make your investment portfolio less risky over time. Again, that leaves you with an unclear picture of what you can expect down the line.

So it’s true: Ellevest’s forecasts might be lower than other advisors’ forecasts. But that’s actually a good thing. A lower forecast doesn’t necessarily mean you’re going to have less money in the end — quite possibly the opposite. We believe that Ellevest’s gender-aware algorithm and more conservative capital market assumptions actually make you more likely to hit those money goals in the end.

It does mean that they should be more reliable. Because forecasts are useless if they aren’t realistic. We may not be able to predict the future, but we can (and do) help you plan for it as realistically as we possibly can.

We assume this woman’s “Retirement on My Terms” goal starts with a balance of $0, and she makes monthly contributions into a Roth IRA of 0.83% of her annual salary, which grows in accordance to a women-specific salary curve provided by Morningstar Investment Management LLC, a registered investment adviser and subsidiary of Morningstar, Inc. The account is invested in a low-cost diversified investment portfolio that begins at 95% equity and becomes more conservative as she approaches her goal date. We use Monte Carlo simulation — a forward-looking, computer-based calculation in which we run portfolios and savings rates through thousands of different economic scenarios to determine a range of possible outcomes, and the results shown reflect a 70% likelihood of achieving an annual retirement income of $125,389 or better, and include the impact of an Ellevest advisory fee of 0.25%, taxes, and inflation. This is a hypothetical client scenario that doesn’t represent any Ellevest client, and it’s by no means individually tailored investment advice. The projections of various investment outcomes are hypothetical in nature, do not reflect actual investment results, and are not guarantees of future results.

*We assume this woman’s “Retirement on My Terms” goal starts with a balance of $0, and she makes monthly contributions into a Roth IRA of 0.83% of her annual salary, which grows in accordance to a women-specific salary curve provided by Morningstar Investment Management LLC, a registered investment adviser and subsidiary of Morningstar, Inc. The account is invested in a low-cost diversified investment portfolio that begins at 95% equity and becomes more conservative as she approaches her goal date. We use Monte Carlo simulation — a forward-looking, computer-based calculation in which we run portfolios and savings rates through thousands of different economic scenarios to determine a range of possible outcomes, and the results shown reflect a 70% likelihood of achieving an annual retirement income of $125,389 or better, and include the impact of an Ellevest advisory fee of 0.25%, taxes, and inflation. This is a hypothetical client scenario that doesn’t represent any Ellevest client, and it’s by no means individually tailored investment advice. The projections of various investment outcomes are hypothetical in nature, do not reflect actual investment results, and are not guarantees of future results.

You may or may not have noticed that we linked to investopedia.com to provide background info on Monte Carlo simulations. FYI, Investopedia (“Solicitor”) serves as a solicitor for Ellevest, Inc. (“Ellevest”). Solicitor will receive compensation for referring you to Ellevest. Solicitor will be paid $3 for each email registration and up to $1,000 when an individual becomes a client. You will not be charged any fee or incur any additional costs for being referred to Ellevest by the Solicitor. The Solicitor may promote and/or may advertise Ellevest’s investment adviser services. Ellevest and the Solicitor are not under common ownership or otherwise related entities.

Morningstar, Inc. has a minority equity interest in Ellevest. Ellevest has separately engaged Morningstar Investment Management, LLC to provide certain services, including its wealth forecast estimators and consultation regarding the make-up of the portfolios (including specific ETFs included in client portfolios). Ellevest uses Morningstar’s services as it believes that doing so is in the best interests of its clients. Further, Morningstar has no control over Ellevest’s investment decision-making process.

The information provided should not be relied upon as investment advice or recommendations, does not constitute a solicitation to buy or sell securities, and should not be considered specific legal, investment or tax advice.

What to Expect When You Invest With Ellevest