What’s Going on With Federal Interest Rates (and How Do They Work)?

On Wednesday, November 2, the Federal Reserve raised interest rates by another 0.75%. That’s the fourth time in a row the Fed has hiked rates by that amount; it hasn’t increased them this quickly since the 1980s. Interest rates are now up to 3.75%, a full 1.50% above where they were in 2019, before the start of the pandemic.

Wait … back up. What are “interest rates” and how do they work? And what does this recent change mean for you? All good questions. Here’s what you need to know. 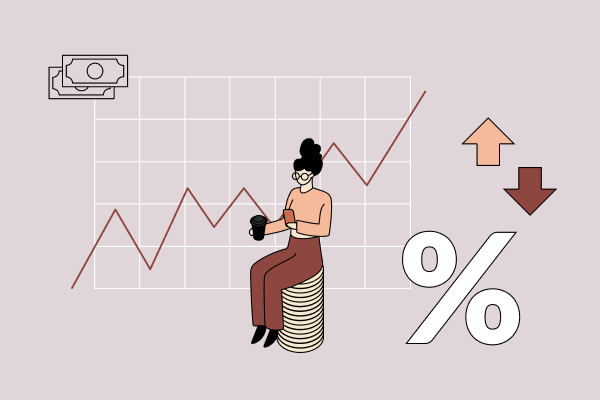 What people mean when they talk about “interest rates”

By law, banks that accept deposits from people are required to keep a certain amount of cash on hand so people can withdraw money. That amount is called their “reserve requirement,” and it’s based on a percentage of the total amount of money that people have deposited at that bank.

But the amount of cash a bank has on hand changes as people go about their business depositing and withdrawing their money. If, at the end of the day, a bank thinks they’re going to have more cash on hand than they need to fulfill the reserve requirement, they can lend some of their extra to another bank who thinks they’re going to come up short. The interest rate banks charge each other on these loans is called the federal funds rate.

The Fed sets a “target” rate

Eight times a year, the Federal Open Market Committee (FOMC) — a group of people from the Fed in charge of setting monetary policy — gets together to decide what the ideal federal funds rate should be, based on how healthy the economy is (more on this in a minute). They can also meet outside their regular eight-meeting schedule if the economy is volatile.

But the FOMC can’t just dictate how much banks can charge each other; that happens via negotiation between the two banks in question. So instead, the FOMC sets a target federal funds rate between a certain range. In November 2022, they set the target rate at 3.75% to 4.00%.

How the federal funds rate affects you (and the economy)

The federal funds rate affects how much banks pay to borrow and lend, and so it impacts how much they charge you for other financial products and causes a ripple effect on other interest rates you might encounter in daily life. That’s what makes it a useful tool for the Federal Reserve when it comes to influencing the health of the economy.

Lower rates give the economy a boost

This makes it less worthwhile to save money, and more worthwhile to borrow money, which encourages people to save less and spend more. So when the economy needs some help, the Fed can lower rates to boost economic activity (aka spending). That’s why the Fed lowered rates to zero in March 2020 (and kept them low for so long).

It works the other way, too: When the federal funds rate increases, so do the interest rates you can earn on things like savings accounts, and the ones charged for things like loans and credit cards.

This makes it more worthwhile to save money, and less worthwhile to borrow money, which encourages people to save more and spend less. So when the economy seems like it’s growing too fast, which can lead to inflation (sound familiar?), the Fed can raise rates to slow economic activity.

For two full years, the federal funds rate was set 0% to help the economy through the COVID-19 pandemic. But then inflation spiked — and didn’t go back down on its own. The Fed has already raised rates a few times this year to try to slow it, but it's still at a decades-long high. So now they’ve bumped rates up to 3.75%, and more rate hikes are expected to come later this year and into next. And while they may slow the pace (aka still raise rates, just not by 0.75%) in December, Fed chair Jerome H. Powell said that considering a pause right now would be “very premature.” He also said it’s possible rates could reach more than 4.60% before coming back down.

And if you’re wondering whether the Fed knows they’re squeezing consumers with these hikes, the answer is “yes, but in a strict parent sort of way.” Understandably, many people are worried that such an aggressive campaign could trigger a recession. But Powell said that they see persistent inflation as a bigger threat to the economy than a recession. Plus, he noted that if the Fed overshoots, it has the tools to help correct it. (Psst: If you’re wondering what you can do now to prep for a potential economic downturn, we’ve got you.)

Here’s what that probably means for you.

So there’s a chance you could see the interest rate you earn on your deposits go up, especially if you have a high-yield savings account. (And the more the Fed raises rates, the more likely that will be.)

Higher interest rates make debt more expensive. The amount you pay for variable-rate credit cards, loans, and mortgages will probably increase. And it could become more expensive to take out new loans with fixed interest rates (mortgages, refinancing your student loans, taking out a home equity line of credit, etc.). In fact, a lot of lenders have already raised prices in anticipation of this change.

Still, with more rate hikes planned later this year, it’s probably not a bad idea to try to put a little extra toward your debt now, if you can. And if you’re considering taking out a new loan or mortgage, you might think about trying to lock that in now, too.

The bottom line on interest rates

TL;DR: Rates go down: borrowing good, saving bad (or less attractive, anyway — saving is never bad). Rates go up: saving good, borrowing … not so much. With inflation being what it is, this rate increase could help cool things off. But as always, it’s impossible to know for sure what will happen next.

That’s why, at the end of the day, our advice is (always) this: Keep calm, invest on, and build that strong financial wellness practice.

How Inflation Changed in October 2022 (and What to Do Now)