There’s so much I could put on a “cheat sheet” about women and money. Seriously. But the most important thing of all, I think, is that money isn’t just money. It’s a means to other things: power, independence, freedom, and living the lives we want. 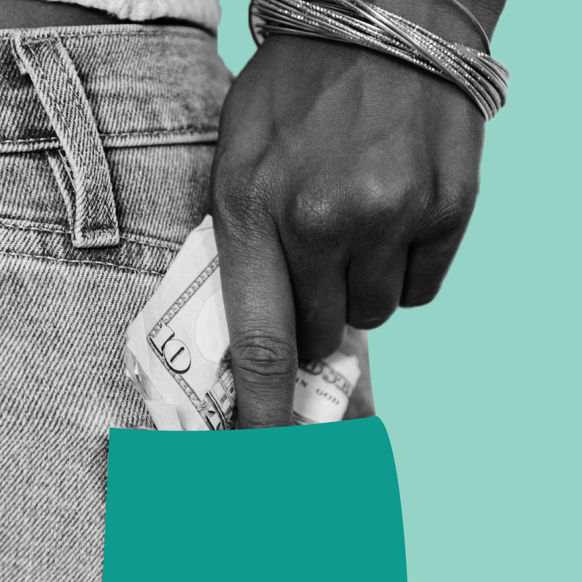 Want to start your own business? Go on a trip around the world? Get an advanced degree? None of it’s possible if we aren’t in control of our money or working toward these goals financially.

That’s key. And it’s why we all need to take control. Here are eight pieces of financial advice every woman should know.

Yes, some debt can be good debt, if it’s not too much. The old rule of thumb for “too much” is when interest payments exceed 20% of your take-home pay and you can’t see your way to repay it.

Other than that, though, for any loans with interest rates less than 5%, we usually recommend paying the minimums and focusing on investing instead. That’s because investing has historically earned more than 5% in returns over the long term.

So what are examples of potentially good debt? A mortgage to buy a home — if you can afford it — is good because, well, you have a home, which can also be a form of investment over time. Same thing is potentially true for student loan debt, because great education can lead you to a more interesting job and forever increase your earnings.

Some of the dopiest financial advice I ever heard was that it’s okay to put off saving for retirement — and other life goals — until I got older, when I would earn more.

Instead, target putting away 20% of your salary from your very first paycheck, if you can. This may sound like a lot — particularly because so many people save nothing. But the act of saving and investing is the number-one driver of women’s confidence in their future. It’s more important than your job title, what you make, what’s in your bank account now.

3. The best time to invest is right now.

Actually, it’s yesterday, but don’t be defeated. I’ve heard all sorts of excuses not to invest: “The market is down, and that makes me nervous.” “The market is up, so there isn’t as much upside.” “I have a whole bunch of stuff I want to read before I get started.” “The markets are rigged for the big guys.” “I want my money in something certain.”

There is truth to all of it ... but none of it justifies not investing. Especially since historically the stock market has provided a superior return compared to keeping money in cash, over time. And investments provide the opportunity for compounding returns over time, which means that every day you wait, you’re not giving yourself the opportunity to earn those returns. In fact, we calculate you could be missing out on $100 a day.*

Do not pass go, do not invest $200 (or anything) until you’ve (a) built an emergency fund and (b) paid off your high-interest debt.

But it’s a little more complicated than that. First, we recommend you start your emergency fund as a mini-fund, with one month’s take-home pay, to give you a cash cushion. Then, move onto your credit cards (or any debt with an interest rate of 10% or more). Once that’s taken care of, then you can go back and polish off that emergency fund, until it contains three to six months’ worth of your take-home pay. This will be your fall-back in case you get fired or laid off, or in case you have to take time away from work for whatever reason — you know, emergencies. That money should be held in a safe, easy-to-access bank account (but maybe hide it from your main checking homepage, if you can, to discourage yourself from using it on non-emergencies).

That’s it. Just those two things: an emergency fund (first mini, then full), and high-interest debt. No need to know all the ins and outs of investing to get started. (Sure, everyone could use more financial education, but it doesn’t hold guys back from investing anyway, and it shouldn’t keep women from investing either.)

5. Your most important asset is you, so get that raise.

Make sure you’re earning what you’re worth. A higher salary now sets you up to earn even more later, since future raises start from a larger base. That also helps us close that frustrating, infuriating, irritating, can’t-believe-we-still-have-this, are-you-kidding-me gender pay gap. If you’re like the typical woman in the US, you are making a whopping 80 cents to a man’s dollar (and that’s way lower if you’re a Black or Latina woman).

Worth an awkward conversation or two, right? Here’s some advice on how to make that happen. (And if the answer from your boss is “no,” changing jobs for a fairer paycheck is always an option.)

Women live, on average, six to eight years longer than men. But we also retire with two-thirds the money that men do. And there’s another reason, too: The financial services industry has traditionally been built by men, for men. Investing, all the jargon, the focus on “outperforming” and “beating the markets.” It’s all pretty macho, and it’s made financial planning and investing feel out of reach for so many women.

That’s reinforced by the messages we women get all our lives — even today, parents talk differently about money to their sons than to their daughters. The boys get taught to build wealth (and get higher allowances on average, too). The girls get taught to budget and save instead.

Meanwhile, 90% of women are solely responsible for our money at some point in our lives — whether we want to be or not. That’s partly because of that longer lifespan … and partly because 40–50% of marriages end in divorce.

I learned this the hard way when I handed my husband control of our money — even though I worked in finance — only to go through a humiliating divorce. I didn’t know how much money we had, or where it was. I had ceded my power, and almost ceded my future.

Oh, and by the way, that focus on “winning the game” with investing? Doesn’t work. Turns out that women are as good — or better — investors than men.

7. Plan for a career break (because they can cost you).

Career breaks can cost you — whether you’re taking time off to have a child, find yourself, switch careers, or because you’ve simply had enough and can’t take it anymore.

That’s because people who take career breaks typically don’t return to their old salary levels; they typically lose some of their earning power — 7.3% less on average for those out of the workforce a year. That gap continues to grow for years after the break, and the impact is long-lasting, because their future raises are based on these lower salary levels.

That’s not to say you shouldn’t take that career break — just make sure you’re 100% aware of how much it will cost you in the long run.

8. You can invest in your values.

Remember “money is power?” Well, increasingly, we can harness that power for issues we care about.

Today, hundreds of billions of dollars are invested in what is called impact investing. This includes sustainable investing, and my personal favorite, gender-lens investing. In a nutshell, this type of investing directs our dollars to companies that, say, do business in a socially responsible way, or advance women in their companies — and avoids companies that don’t.

Chances are you won’t be hearing about this from your financial professional. Historically, there’s been a view that these types of funds had to underperform financially. Not true.

Companies that do business the “right way” are also companies that can deliver good business results, as well as fair returns for investors. And by investing in them, we can not only earn a return, but also have an impact.

Source Ellevest. To calculate “about $100,” we compared the wealth outcomes for a woman who begins investing at age 30 with one who began investing at age 40 after having saved in a bank for 10 years. Both women begin with an $85,000 salary at age 30 and all salaries were projected using a women-specific salary curve from Morningstar Investment Management LLC, a registered investment adviser and subsidiary of Morningstar, Inc., which includes the impact of inflation. We assume savings of 20% of salary each year. The bank savings account assumes an average annual yield of 1% and a 22% tax rate on the interest earned, with no account fees. The investment account assumes an investment with Ellevest using a low-cost diversified portfolio of ETFs beginning at 91% equity and gradually becoming more conservative during the last 20 years, settling at 56% equity by the end of the 50-year horizon. These results are determined using a Monte Carlo simulation—a forward-looking, computer-based calculation in which we run portfolios and savings rates through hundreds of different economic scenarios to determine a range of possible outcomes. The results reflect a 70% likelihood of achieving the amounts shown or better, and include the impact of Ellevest fees, inflation, and taxes on interest, dividends, and realized capital gains. We divided the calculated cost of waiting 10 years to invest, $341,181, by 3,650 (the number of days in 10 years). The resulting cost per day is about $93.47.

The results presented are hypothetical, and do not reflect actual investment results, the performance of any Ellevest product, or any account of any Ellevest client, which may vary materially from the results portrayed for various reasons.

You may or may not have noticed that we linked to creditcards.com for information about credit card debt. FYI, LinkOffers, Inc (“Solicitor”) serves as a solicitor for Ellevest, Inc. (“Ellevest”). Solicitor will receive compensation for referring you to Ellevest. Compensation to the Solicitor will be $10 per membership activated. You will not be charged any fee or incur any additional costs for being referred to Ellevest by the Solicitor. The Solicitor may promote and/or may advertise Ellevest’s investment adviser services. Ellevest and the Solicitor are not under common ownership or otherwise related entities.

Banking products and services are provided by Coastal Community Bank (“Coastal”), member FDIC, pursuant to license by Mastercard International. Your Ellevest Save and Ellevest Spend account deposits will be insured to the regulatory limits by the FDIC.

Together, the Ellevest Save and Spend accounts are FDIC-insured up to $250,000 per depositor through Coastal Community Bank, Member FDIC.

How to Pay Off Debt and Take Control of Your Money