So your employer offers a 401(k). That’s great news for you — a 401(k) is an A+ tool to help you put money aside for retirement and save you some serious scratch on taxes. But how much to contribute to a 401(k) isn’t necessarily the only decision you need to make. Half of US employers offer both a traditional 401(k) and a Roth 401(k). Both have tax advantages, but they work differently from one another. 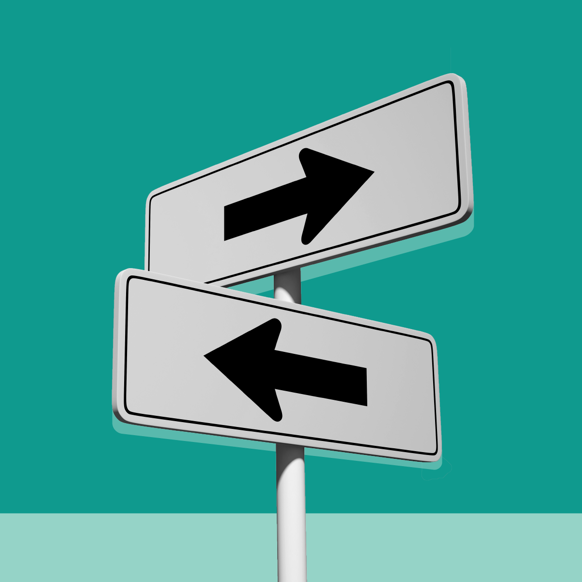 First question: When do you want to pay taxes — now or later?

Income taxes are a thing. And the money you withdraw from your 401(k) when you retire is, technically, income. But by choosing between a traditional and a Roth, you do get to decide if you want to pay those taxes later or now (or some later and some now).

You might be able to save money in the long term if you pay those taxes now. It all comes down to tax brackets — because you’re probably not going to be in the same one forever.

Maybe you plan to live off less money during retirement than you’re making today. That would mean your tax bracket could be lower in retirement — which means you’d probably save money by waiting to pay your taxes until then.

Or you might expect your income to go up a lot between now and retirement. In that case, your tax bracket could be higher once you retire — which means you’d probably save money by paying taxes now. (Of course, all of this assumes that our general tax bracket structure stays the same. Who even knows.) 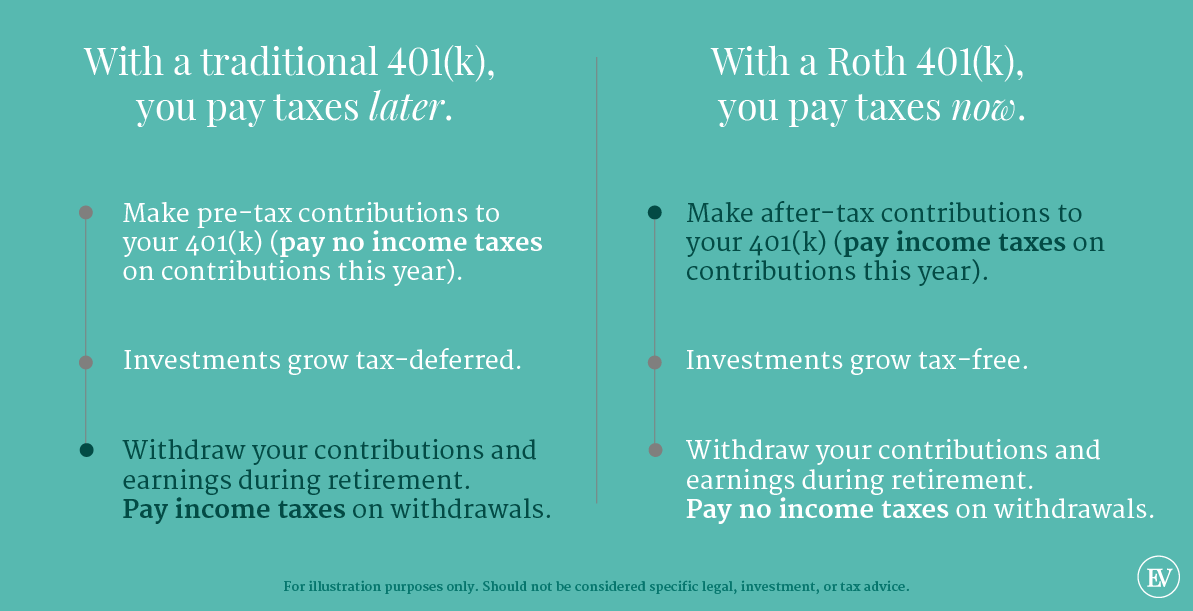 Traditional vs. Roth 401(k): More things to think about

Still not sure which is right for you? Here’s a rundown of the main ways a traditional 401(k) and a Roth 401(k) are similar and different.

How they’re the same

Nada. You can contribute to a traditional or Roth 401(k) no matter how much you make. There’s one exception: If you’re considered a “highly compensated employee” (if you make $150,000 per year, are in the top 20% of earners in the firm, or own more than 5% of the company — the limit is called an “HCE threshold”— the limit is called an “HCE threshold”), your contributions may be capped because of the IRS’s non-discrimination requirements. Check with your HR team or 401(k) plan administrator if you think that might apply to you.

You can’t take your money out of a 401(k) until you’re 59½ (unless you’re going through a hardship or meet one of the IRS’s other exceptions). Otherwise, you’ll have to pay all the taxes you owe plus a 10% penalty fee. Ouch.

You have to start withdrawing your money in the year you turn 72 (unless you’re still working for that employer). If you don’t there are — you guessed it — more hefty fees.

Taxes while your money’s growing

Good news: You won’t pay taxes on any capital gains, dividends, or interest that your contributions earn. (Nice.)

With a traditional 401(k), you don’t pay income taxes on the money you put in today — which is why you might see them called “pre-tax” retirement accounts. Instead, they usually come out of your paycheck before taxes, and they reduce your total taxable income. So if you made $60,000 and put $8,000 into your traditional 401(k), those contributions would cut your taxable income down to $52,000.

With a Roth 401(k), you make contributions “post-tax,” meaning you’ve already paid income tax on that money. You don’t get to deduct them, but that’s OK — the tax benefits of a Roth come later.

Uncle Sam has a long memory. If you use a traditional 401(k), he’ll have been waiting for you to retire so he can finally collect those taxes you’d didn’t pay yet. So when you make withdrawals during retirement, they’ll be taxed according to your tax bracket at that time.

With a Roth 401(k), your tax bill is already paid, so you’ll get to withdraw your money (and earnings!) tax-free, as long as your account is at least five years old.

FYI: Your employer match won’t go into a Roth

Many employers offer a 401(k) contribution match, meaning if you put money into your 401(k), they’ll put some in, too. (Yes, that means free money.) This is pretty straightforward with a traditional 401(k), because you’ll pay all your taxes later, when you retire.

But with a Roth 401(k), you’re using after-tax dollars, and your employer isn’t going to pay income taxes for you. So they’ll probably deposit your matching contributions into a separate, traditional 401(k), and you’ll pay taxes on them during retirement.

Keep an eye on fees

With a 401(k) — traditional or Roth — your employer selects a range of investment options for you to pick from. Because you don’t have a ton of options, you might have less control over how much you’re paying in fees — and sometimes those fees can be high.

For many people, even if the fees aren’t quite as low as you could get with an IRA, the additional tax benefits of a 401(k) outweigh the cost in fees. That being said, it’s definitely worth making sure just in case.

And if you leave your job, you won’t be able to contribute to that 401(k) (or get all the same tax benefits) anymore. That’s a good time to look into rolling your old 401(k) over into either an IRA or your new employer’s 401(k).

So, which one is right for you?

The whole traditional-vs-Roth 401(k) question has a lot to do with taxes, and everyone’s tax situation is different. Ellevest isn’t a tax pro, so we can’t tell you exactly what’s right for you.

There’s no way of knowing that, so one way to hedge your bets is to use both a traditional and a Roth 401(k). You can divide your contributions between the two any way you want — you just can’t do more than $22,500 ($30,000 if you’re over 50) in total. If your main account is a Roth and your employer gives you a match, as mentioned above, this strategy might come built-in. Either way, it’s a good idea to talk to a tax pro to really understand what’s right for you.

The whole “which type of 401(k)” question isn’t half as important as just getting started. Putting money toward your future regularly and often is step one in going after the retirement you deserve.

All opinions and views expressed by Ellevest are current as of the date of this writing, are for informational purposes only, and do not constitute or imply an endorsement of any third party’s products or services.

Information was obtained from third-party sources, which we believe to be reliable but are not guaranteed for accuracy or completeness.

The information provided does not take into account the specific objectives, financial situation, or particular needs of any specific person.Investing entails risk, including the possible loss of principal, and past performance is not predictive of future results.

Ellevest, Inc. is an SEC-registered investment adviser. Membership fees and additional information can be found at www.ellevest.com.

The One Resolution You Really Need to Make