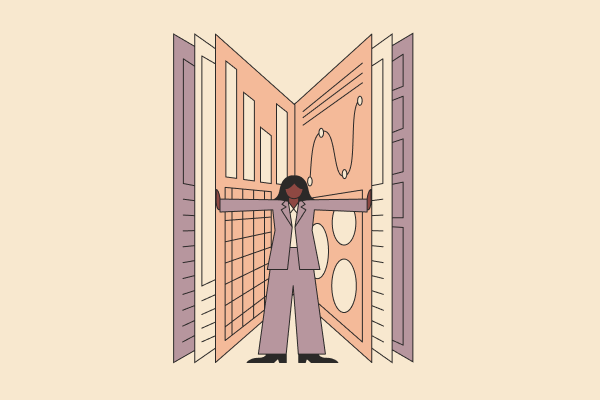 Still, you don’t have to look far to find amazing Black women at every level of the financial services industry — women who saw the stacked odds and did it anyway. Their leadership has been critical not only in terms of visibility, but also because this industry is where wealth is created and built. The choices made in finance — who and what to invest in, how to design money systems and create access to capital — ripple outward to every other realm of our lives, and the effects of those decisions can last generations, for better and worse. When Black women are part of that decision-making process, everybody stands to benefit. Here are ten Black women trailblazers whose success gives us hope.

The daughter of a former slave, Maggie Walker was the first Black woman to charter and serve as president of a bank. Her St. Luke Penny Savings Bank opened in 1903 in Richmond, VA. At the time, banks discriminated heavily against Black people, and Walker’s vision was to create a place where they could keep money in their own community and become financially empowered. By 1920, the bank had issued mortgages to more than 600 Black families, employed many Black people, and became a point of pride in the community. Her name lives on.

Lilla St. John became the first Black woman to pass the New York Stock Exchange exam for financial advisors in 1953. She was also 25 years old and the mother of two children. No big.

After graduating from Duke and getting her MBA from Wharton, Valerie Mosley went on to hold roles at a whole slew of Wall Street firms, including senior vice president, partner, and portfolio manager for Wellington Management Company, a global investment firm. Today, she’s the founder and CEO of Valmo Ventures, which she created “to advise and invest in companies that add value both to investors and society.” She also developed a financial literacy program for high school students. Her life’s mission is to help others “grow their self-worth and net worth.” (Same.)

Mellody Hobson began her career as an intern at Ariel Investments, a mutual fund and investment management firm in Chicago. Today, she’s president and co-CEO, and Ariel is the largest minority-owned mutual fund firm in the US. In 2015, Hobson was named to Time magazine’s list of the 100 most influential people in the world (!), and in 2017, she became the first Black woman to head the Economic Club of Chicago. (She’s also an investor in Ellevest, Inc., btw.)

Carla Harris has worked in finance for 30 years, and today she’s vice chairman, managing director, and senior client advisor at Morgan Stanley. President Obama appointed her the chairperson of the National Women’s Business Council in 2013, and she gave a speech on the myth of the meritocracy and the need for sponsors at TEDWomen in 2018. In her free time (?!), she’s also become a published author and a Carnegie Hall-filling gospel singer. … Wow.

Originally, Edith Cooper planned to open a fashion boutique in NYC … but then she went to Northwestern’s Kellogg School of Management and launched a 30-year career on Wall Street instead. In the last nine years of her career at Goldman Sachs, she was head of Human Capital Management and played a big role in reforming their hiring practices to improve their diversity. Very here for it.

Suzanne Shank began her career as an engineer, but then she got her MBA at Wharton, where she fell in love with finance. Today, she’s CEO and president of Siebert Williams Shank & Co, one of the biggest Black-owned financial companies in the US and the best-ranked women-owned and minority-owned Wall Street firm. She was also named National Entrepreneur of the Year by the Madame C.J. Walker Center. She says, “The most important thing we [women in finance] can do right now is give a hand up and provide mentorship for other women.” Amen.

Racquel Oden’s journey down Wall Street has taken her to Morgan Stanley, UBS, Merrill Lynch, and now JP Morgan. While she was at Merrill, she served as head of advisor strategy and development, where she was responsible for hiring and training the firm’s 14,000 financial advisors. She became known for her focus on diversity in the talent pipeline, making it a rule that half of their incoming interns had to be women and / or people of color and partnering closely with HBCUs. In 2016, she told The Network Journal, “I hire more than 1,700 advisors a year and I’ve made it a commitment to put diversity at the forefront of my job.” Yes.

“When you know what it’s like to look in the refrigerator and just see baking soda, or know what it’s like to have your lights turned off, personal finance is important,” Thasunda Brown Duckett (or “T”, as she’s better known) told the New York Times. Her family faced a lot of financial hardship when she was younger, and so when her career brought her to the mortgage business, she jumped at the opportunity to help people. Previously CEO of Chase Consumer Banking, she currently serves as CEO and president of TIAA, where she’s continued to follow her passion for spreading financial literacy. “Because the reality is, for many people, the lack of money defines who you are.”

When she was 22 years old, Lauren Simmons became the youngest trader at the New York Stock Exchange — and the only woman. She was also the second Black woman trader ever. She got the job after graduating with a degree in genetics and a minor in statistics, moving to NYC, meeting Richard Rosenblatt (CEO of Rosenblatt Securities), and basically just convincing him to let her have the job. That said, she also left Wall Street a few years later after revealing that she only made $12,000 (not a typo!) a year at Rosenblatt. Today she’s taken her financial savvy public (not to mention gotten her bag, finally) with podcasts, web series, and speaking engagements. There’s even a biopic about her in development. You get those life-rights dollars, Lauren.

You may or may not have noticed that we linked to Forbes.com for information about Mellody Hobson, Suzanne Shank, and Lauren Simmons. FYI, Forbes (“Solicitor”) serves as a solicitor for Ellevest, Inc. (“Ellevest”). Solicitor will receive compensation for referring you to Ellevest. Compensation to the Solicitor will be $20 per membership activated. You will not be charged any fee or incur any additional costs for being referred to Ellevest by the Solicitor. The Solicitor may promote and/or may advertise Ellevest’s investment adviser services. Ellevest and the Solicitor are not under common ownership or otherwise related entities.