Native American women make only 60 cents for every dollar the average white man makes. And Equal Pay Day for Native women — the day that represents how much longer they have to work to earn as much as an average white man made in one year — doesn’t happen until October 1.

That’s just barely before we observe Native American Heritage Month in November, celebrating the diverse culture, accomplishments, and heritage of the first inhabitants of what’s now the United States. At Ellevest, we like to celebrate the women+ who are leading the way — from the record number of Native American women headed to Congress in 2021 to the entrepreneurs starting businesses faster than the average rate to the activists fighting against racism, violence, and a legacy of injustice. 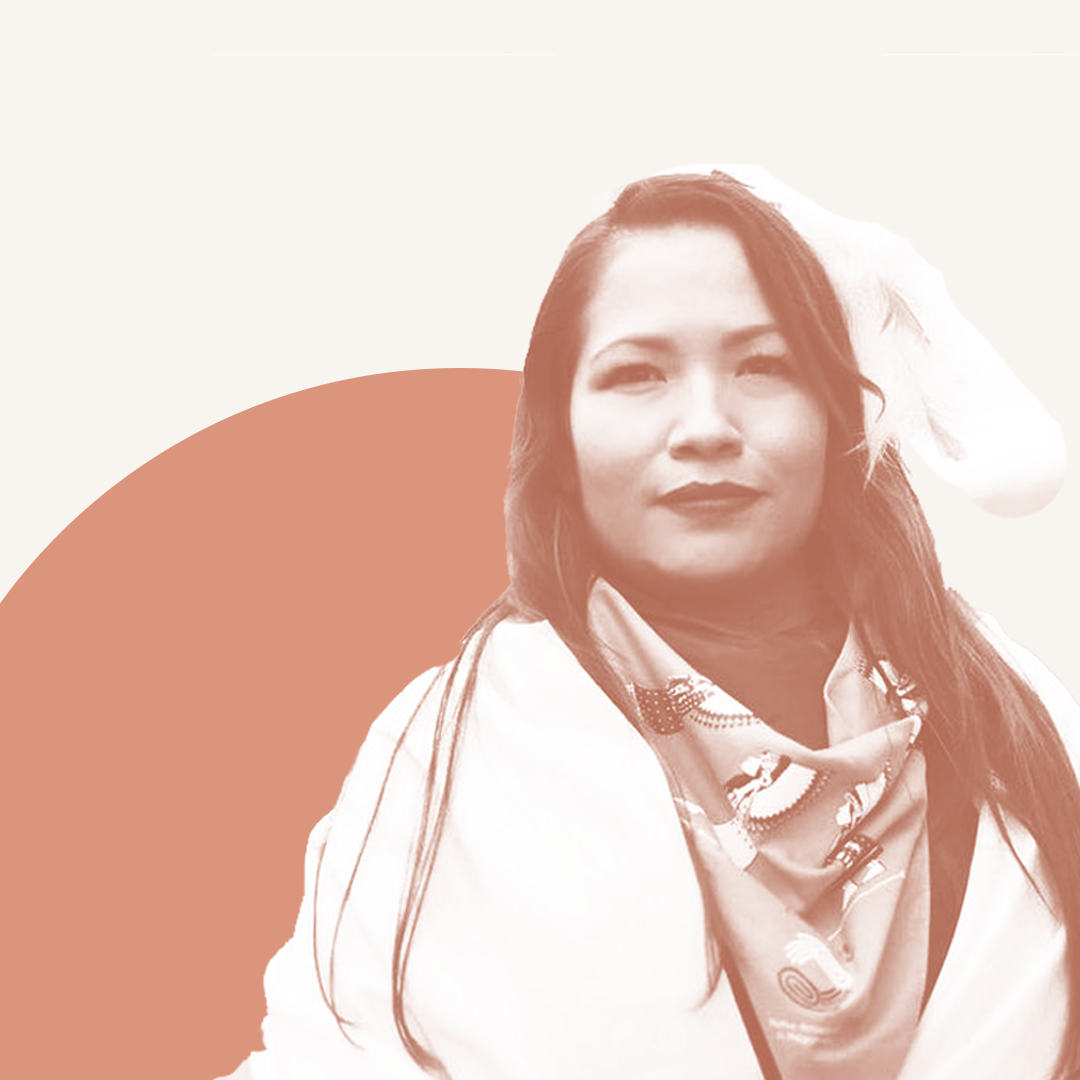 Today, we’re sharing eight inspiring Native American women who have worked to lift up their communities, build new ways to earn what they’re worth, fight for equality, and disrupt money.

A member of the Ho-Chunk Nation, Sharice Davids was born in Frankfurt, Germany, the child of a single mom who was a drill sergeant in the Army. As a child, she was fascinated by martial arts and especially admired Bruce Lee (she even wore a black belt around the house). But lessons weren’t in the budget then. Davids took her first martial arts class as a 19-year-old college student, and continued to train while putting herself through first community college, then university, then Cornell Law School. She began competing in mixed martial arts in 2006 and briefly went pro in 2013. But her true calling was in helping her community, and she shifted focus to travel the United States and live on Native American reservations, working on community development. Her work earned her a White House fellowship in 2016. She ran for a seat representing Kansas in the US House of Representatives in 2018, and made history when she won — becoming the first out LGBTQIA+ Native American in Congress and (with Deb Haaland) one of the first two Native American women representatives.

CEO and founder of B.Yellowtail

Bethany Yellowtail, born and raised in Montana between the Crow and Northern Cheyenne reservations, was a few years into her fashion career when she became frustrated by the appropriation of her heritage across the industry. She launched B.Yellowtail to carve out a space for authenticity, combining traditional Native American clothing with contemporary silhouettes. In addition to selling her own designs, B.Yellowtail doubles as a retail space that supports other Indigenous artists, letting creatives earn what they’re worth and take home the majority of the retail cost. Bethany is one of the most prominent Native American designers working today.

“I realized that there isn’t a space that authentically represents Native people. I was working for brands that would come out with ethnic or Indigenous-inspired collections, but I didn’t connect with them. It was a lightbulb moment. I needed to create my own space.”

Sarah Eagle Heart was raised in the Oglala Lakota tribe on the Pine Ridge Indian Reservation in South Dakota, and was an activist for her community from a young age — including protesting an appropriative homecoming ceremony at the neighboring high school. Since then, she’s worked internationally as a leader for social and environmental justice within the Episcopal Church, worked with Women’s March leaders to bring Indigenous women to the forefront, and became an Emmy award-winning storyteller. Sarah is the CEO of Native Americans in Philanthropy (NAP), a national non-profit that educates and lifts up Native peoples to create healthy and sustainable communities. In 2017, she won the American Express NGEN Leadership Award, which recognizes trailblazers whose work has had a transformative impact on a critical social need, and in December of last year, Sarah launched Return to the Heart, an Indigenous women-led non-profit foundation that champions climate justice, narrative change, and equity for Native Americans.

“There’s frequently a very low baseline of awareness that our conversations can be totally dominated by basic education. If we can get individuals and organizations to a place of cultural knowledge where they understand the need for action and understanding, we can advance the conversation further.”

Growing up in the Coeur d’Alene tribe in Idaho, Paulette Jordan cultivated a passion for protecting the Earth’s natural resources and fighting for the needs of her community. Both of her grandparents were chiefs, and much of their work involved protecting the tribe’s sovereign rights to land and other natural resources. She developed a strong connection to the state’s land and the people who share it, which inspired her to enter politics: In 2008, Paulette was elected to the Coeur d’Alene Tribal Council, becoming the youngest person to ever hold her role. In 2014, she ran to represent Idaho’s 5th district in the Idaho House of Representatives, won, and successfully ran for a second term two years later. Paulette became the first Native American woman to run for governor in US history in 2018, and though she didn’t win, she earned nearly 40% of the vote — more than had ever been cast for any Democratic governor nominee in Idaho’s history. She carried that energy into the 2020 Senate race, where she would have become the first Native American woman in the US Senate.

“We’re the last to really come to the table to be able to have a voice. And now that we are starting to build into this practice of voting and participating in the national electoral process, we’re also recognizing that we can not only now vote, but we can also run and become a voice.”

As a child, Dr. Susan La Flesche Picotte — born on Nebraska’s Omaha reservation in 1865 — watched a sick Native American woman die because a white doctor refused her care. She decided then and there that she would train to be a physician and provide medical services for those in her community. She left the reservation at age 14 to attend New Jersey’s Hampton Institute, and went on to graduate top of her class at the Women’s Medical College of Pennsylvania. She was the first Native American woman in the US to receive a medical degree. Over the course of her career, Dr. La Flesche served more than 1,300 people across 450 square miles, giving financial advice and resolving family disputes in addition to providing medical care.

“White people have reached a high standard of civilization, but how many years has it taken them? We are only beginning; so do not try to put us down, but help us to climb higher. Give us a chance.”

After being diagnosed with an autoimmune illness ten years ago, Melinda Williamson — a member of the Prairie Band Potawatomi Nation — began researching natural healing methods. Eventually, she came across kombucha: a fermented tea drink that’s said to boost immunity, and a $475 million industry in the US. In 2015, Melinda decided to take the leap and start her own company, and Morning Light Kombucha was born. Ninety percent of the ingredients are sourced from the Prairie Band Potawatomi Nation reservation in Hoyt, Kansas (many foraged by Melinda herself), and a portion of every sale goes back to Native communities. Currently, Morning Light is the only Native American-owned kombucha brewery in the country. Melinda is invested in the next generation of Native American entrepreneurs and passionate about encouraging more women to pursue their passions through business.

“I’m a single mom. I’ve been doing this on my own. I love that I’m able to inspire other mothers and other women to go out and pursue what they want. That’s exciting to see.”

Suzan Shown Harjo, born in Oklahoma of Cheyenne and Muscogee ancestry, has been at the forefront of every major battle in recent Native American history, from fighting to remove racist mascots to protecting sacred sites. As president of the Morning Star Institute, Suzan has worked alongside other Native people to recover more than one million acres of land, and she’s recognized in both Native American communities and the museum world for her work in repatriating and protecting Native ancestors. In 2014, she was a recipient of the Presidential Medal of Freedom — no wonder, since US presidents from Carter to Obama have signed legislation with her imprint into law. President Obama said it best: “Her tireless efforts have protected Native culture, returned Native lands, and improved Native lives. With bold resolve, Suzan Shown Harjo pushes us to always seek justice in our time.”

“A lot of my once-radical ideas have become federal law, and that makes me grateful for every person and all the peoples who influenced my thinking.”

The daughter of two veterans, Haaland is a 35th-generation New Mexican and a member of the Laguna Pueblo people. After moving around as a military kid, she put herself through college and gave birth to her daughter four days before graduating in 1994. The following year, she launched her own company, Pueblo Salsa, which she ran while caring for a baby and attending law school at the same time. (Wow.) Haaland has always been open about the challenges that she faced as a single mom and Native American — her official US House bio notes that both she and her daughter are still paying off student loans, and she’s also said that if she’d scored five points higher on the bar exam, her life would probably have gone a different way. Instead, she became the first woman elected to the Laguna Development Corporation’s board of directors and began advocating for environmentally friendly business practices. That led to a political path, and she became the first Native American woman to lead a state political party before successfully winning a US House seat in 2018. As a representative, Haaland has introduced several bills to address the crisis of missing and murdered indigenous women.

“I’m always gonna fight for folks. I think it’s any government’s obligation to make the lives of people better. That’s why we pay our taxes. We want good roads, we want solid bridges. We want nice playgrounds for kids to play in. We want safe communities. We don’t want our neighbors to go hungry. I know what a nice neighborhood is like, and I want people to be able to find success.”