Not to sound like a broken record, but the month of May was a roller coaster for the markets. The S&P 500 actually ended the month just about equal to where it started, but not before tumbling briefly into bear market territory mid-month. (Reminder: A bear market is when a major stock market index drops 20% from its most recent peak. Also, the origin of the term makes a great party fact.)

What drove market volatility this month?

After consecutive weeks of market losses, it was a breath of fresh air to watch all the major market indices post gains in the last full week of May. It was short-lived, though, as investors had plenty of worries. Companies like Target and Walmart’s reported earnings were lower than expected, and they warned investors about shrinking profits. Then, of course, there are the ongoing themes of increasing oil prices, constrained global supply chains, slow growth in China, and the war in Ukraine, not to mention rising inflation and expected interest rate hikes.

As the Federal Reserve works to tame inflation, some are worried that they aren’t being aggressive enough to cool the economy down, and others are concerned that they might raise rates too much too quickly and send the economy into a recession. It’s a delicate line to walk, since we won’t see the outcome of the Fed’s decisions and actions until a few quarters have passed.

Are bear markets something to worry about?

While no one likes bear markets, downturns are an inevitable part of investing. It’s painful when we’re in one, but it’s worth remembering that historically, bear markets have been short compared to bull markets (that is, periods when markets were trending up). 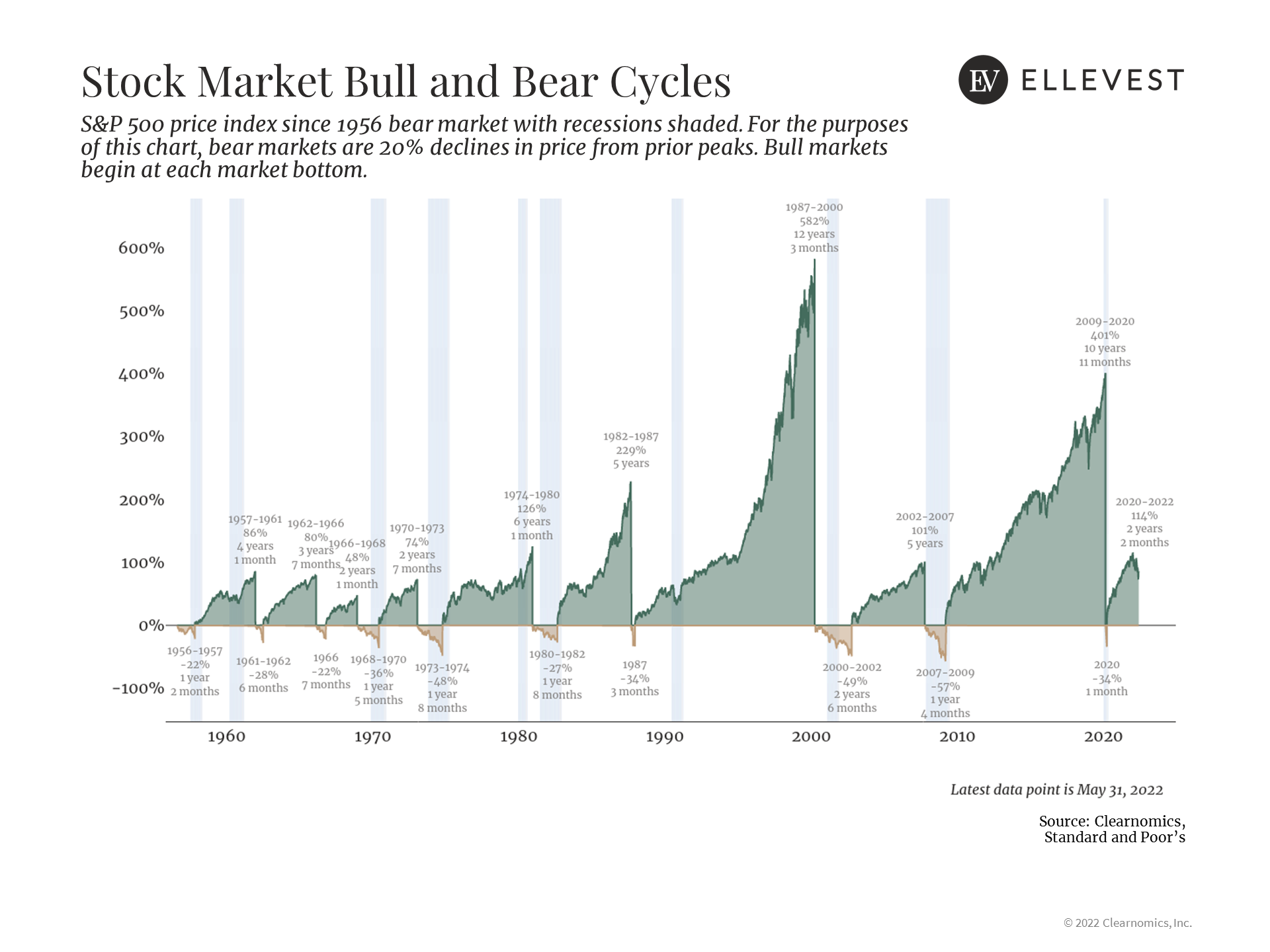 There’s no way to know when we’ll enter a bear market in the future. But if history is any guide, it could be brief when compared to past bull markets. Morningstar also recently made the case that if a recession were to occur, it would likely be short-lived.

Also worth remembering: Just as bull markets don’t go straight up, bear markets don’t go straight down; they’re characterized by rallies along the way. It’s impossible to know when the “bottom” is until we’re already past it. That’s true for economic data, too; by the time it’s reported, it’s in the past. So while it’s helpful to check the rearview mirror to understand where we’ve been, it’s more important to look ahead and do our best to prepare for hazards along the road. That means focusing on the long term (aka not trying to time the market) and ensuring your portfolio is well diversified.

Over the course of more than two decades (pandemic notwithstanding), we’ve enjoyed a bull market in both stocks and bonds, thanks to Goldilocks economic conditions. But just like the children’s story, the bears are knocking at the door. And while a lot of inflation’s root causes are outside the Fed’s control, let’s hope they can deftly use the tools they have and get it “just right” for a soft landing.

Market Insights: Volatility, Bonds, and What to Do About Them