Roth vs. Traditional IRA: What You Need to Know

So you’re making retirement money moves, you’ve made it through the whole 401(k) vs. IRA decision, and you’re ready to move forward with an IRA. Nice work — that dream retirement’s looking a lot more real. Next up: deciding whether you want to use a traditional IRA or a Roth IRA (or both). Here’s what you need to know.* 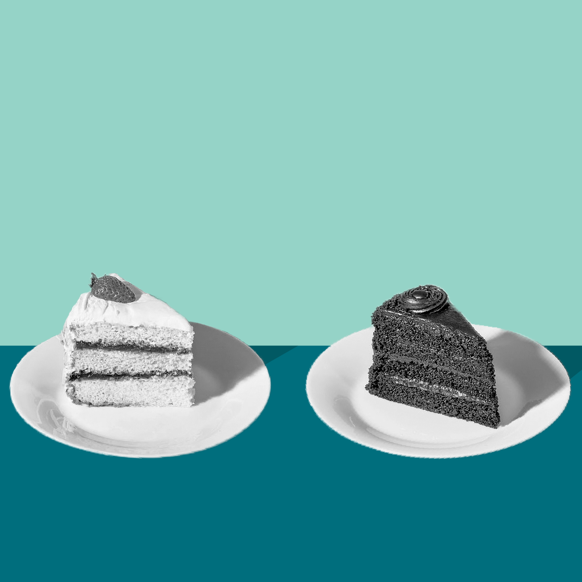 Not everyone’s eligible to Roth it up.

Before we go any further, there’s one big thing you need to know: Not everybody’s eligible to contribute to a Roth IRA. There are income limits. So if your modified adjusted gross income (MAGI) in 2022 is over $144,000 as a single filer (or $214,000 as a married couple filing jointly), then the whole “Roth vs traditional” question won’t even apply to you. (In which case, maybe it’s time to upgrade your old IRA, or take care of your employees like a boss, or … you know, just saying.)

If you are under the income limit and eligible for a Roth IRA, let’s do this.

The big “when do I want to pay taxes” question

OK, so here’s the thing: When you retire, the money you withdraw to live off of will be considered income. And you’ve got to pay income taxes — you’ve heard the whole “death and taxes” thing, right? So the decision is this: Do you want to pay those taxes later, or do you want to pay them now? (Or maybe some later and some now?)

With a traditional retirement account, you pay taxes later. With a Roth retirement account, you pay taxes now. So if you think you’ll be in a lower tax bracket when you retire, you might choose a traditional, and if you think you’ll be in a higher tax bracket, you might choose a Roth. Or, if you have no idea what’s going to happen in the future (what, did you misplace your crystal ball or something?), you might decide to hedge your bets and do a little bit of both. 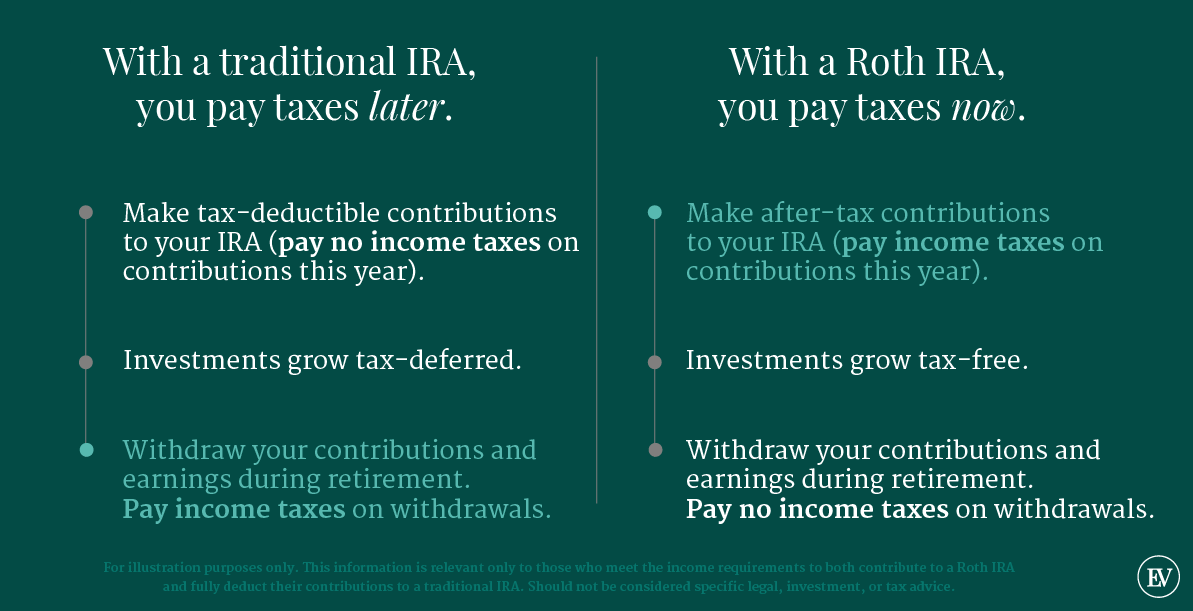 Still not sure which is right for you? Here’s a rundown of the main ways a traditional IRA and a Roth IRA are similar and different.

How traditional and Roth IRAs are the same

Both traditional and Roth IRAs are retirement accounts with sweet tax benefits. Both allow your contributions to grow tax-free (aka you don’t pay taxes on capital gains, dividends, or interest). And, as long as you’re under the income limits, both allow you to contribute up to $6,000 a year ($7,000 if you’re over 50) — although that’s the limit total, not each. If you have both types of accounts, you can’t put $6,000 into one and $6,000 into the other.

It also used to be the case that traditional IRAs had an age limit, while Roth IRAs didn't. But as of January 1, 2020, that's old news. Now there's no age limit for either type of IRA, as long as either you and or your spouse is still working.

How traditional and Roth IRAs are different

There’s no income limit for a traditional IRA; anybody who has an income can open and contribute to one. And if you make under a certain amount, you might be able to deduct them on your taxes (more on that below).

With traditional IRAs, you probably won’t pay income taxes on the money you put in today, as long as you fall within the income limits (more below). That’s why you might see them called “pre-tax.” Instead, you may get to deduct your contributions when you file your taxes. That means they reduce your total taxable income for the year. So if you made $50,000 and put $5,000 into your traditional IRA, those contributions would cut your taxable income down to $45,000.

But yep, you’re looking at income limits for the tax benefits. Single filers who have access to a 401(k) and a MAGI over $78,000 can’t deduct their contributions. If your MAGI is between $68,000 and $77,999, you can deduct some of your contributions to your traditional IRA. And if your MAGI is under $68,000, you can deduct the full amount of you contributions. (Married couples and those who don’t have access to a 401(k) will have different thresholds, but the same general idea applies — high earners’ eligibility is gradually phased out.)

With a Roth IRA, all contributions are made “post-tax,” meaning you’ve already paid income tax on that money. You don’t get to deduct them, but don’t worry — the tax benefits of a Roth come later.

If you didn’t pay taxes when you put money into a traditional IRA, Uncle Sam is waiting to collect income taxes on it. (Uncle Sam doesn’t forget these things.) So when you make withdrawals during retirement, that money is subject to your regular income tax, according to whatever tax bracket you fall into then.

If you weren’t eligible to deduct your traditional IRA contributions, however, you’ll have paid your taxes already. So you won’t have to pay taxes on those dollars later. (Make sure you keep track of those post-tax contributions and report them to the IRS so that your withdrawals get taxed correctly.)

With a Roth IRA, you also already paid those taxes. That means you’ll get to withdraw your money tax-free.

If you have a traditional IRA, you have to wait until you’re 59½ before you can start taking money out of your account. Otherwise, you’ll have to pay a 10% penalty — on top of the ordinary income taxes you’d owe anyway.

If you have a Roth IRA, you can take your contributions out at any time, without having paid taxes (because you already paid them) or penalties. However, you have to wait until you’re 59½ to start withdrawing your earnings (and your account has to be at least five years old), or else you’ll pay that 10% penalty.

Again, by the time you retire, the IRS will have been waiting a while to collect taxes on the money in your traditional IRA — so they aren’t going to let you just keep it in your account forever. When you turn 72, you have to start making “required minimum distributions” (RMDs). If you don’t, you’ll get slapped with a penalty equal to 50% (!) of your RMD.

But with Roth IRAs, the IRS isn’t waiting for anything, so there aren’t any RMDs. (So if you expect to have enough income during retirement that you won’t need the money in your IRA, a Roth could help you leave a bigger inheritance for your heirs.)

So … traditional? Roth? Both?

If you’re looking for straightforward guidance on which type of account to use, we have good news: When you become an Ellevest Plus or Executive member, you can create a retirement plan with us. We’ll use the info you give us about your income to see if you’re eligible for a Roth. Then, if you are, we estimate your retirement forecast with a Roth IRA versus a traditional IRA, and then recommend the account type with the higher forecast. (We use the tax brackets that exist today, but there’s always a chance the laws could change.)

And so, in the end, whichever one you choose is sort of a gamble. Even if you’re right about what will happen with your income, who’s to say that tax brackets will even be the same when you retire? The changes that came with 2017's Tax Cuts and Jobs Act already showed that reform is possible.

One way to try to hedge those bets is to use both account types at the same time. How you split your contributions between the two is up to you — you just can’t pass $6,000 ($7,000 if you’re over 50) in total. And it’s a good idea to talk to a tax pro to really understand what’s right for you.

Whichever account type (or types) you decide to go with, one thing is for sure: When it comes to investing for retirement, the most important thing is that you do it — often and regularly.

PSA: The whole traditional-vs-Roth question has a lot of tax implications, and everybody’s tax situation is a little different. Ellevest isn’t a tax pro, so we can’t tell you exactly what’s best for you. This info is just meant to give you the tools to make an informed choice.

You may or may not have noticed that we linked to a page on nerdwallet.com as the source for this year’s tax brackets. FYI, NerdWallet, Inc (“Solicitor”) serves as a solicitor for Ellevest, Inc. (“Ellevest”). Solicitor will receive compensation for referring you to Ellevest. Compensation to the Solicitor will be $20 per membership activated. You will not be charged any fee or incur any additional costs for being referred to Ellevest by the Solicitor. The Solicitor may promote and/or may advertise Ellevest’s investment adviser services. Ellevest and the Solicitor are not under common ownership or otherwise related entities.

You may or may not have noticed that we linked to https://www.investopedia.com/ for information about the "Roth v. Traditional" concept and average annual income. FYI, Investopedia (“Solicitor”) serves as a solicitor for Ellevest, Inc. (“Ellevest”). Solicitor will receive compensation for referring you to Ellevest. Compensation to the Solicitor will be $10 per membership activated. You will not be charged any fee or incur any additional costs for being referred to Ellevest by the Solicitor. The Solicitor may promote and/or may advertise Ellevest’s investment adviser services. Ellevest and the Solicitor are not under common ownership or otherwise related entities.

You may or may not have noticed that we linked to a page on https://www.forbes.com/ for information on the elimination of age limits for IRAs. FYI, Forbes (“Solicitor”) serves as a solicitor for Ellevest, Inc. (“Ellevest”). Solicitor will receive compensation for referring you to Ellevest. Compensation to the Solicitor will be $20 per membership activated. You will not be charged any fee or incur any additional costs for being referred to Ellevest by the Solicitor. The Solicitor may promote and/or may advertise Ellevest’s investment adviser services. Ellevest and the Solicitor are not under common ownership or otherwise related entities.