If you live in the world and have ever searched for a job, you might have heard that networking is a big deal. Ellevest CEO Sallie Krawcheck says it all the time: “Networking is the #1 unwritten rule of success.” 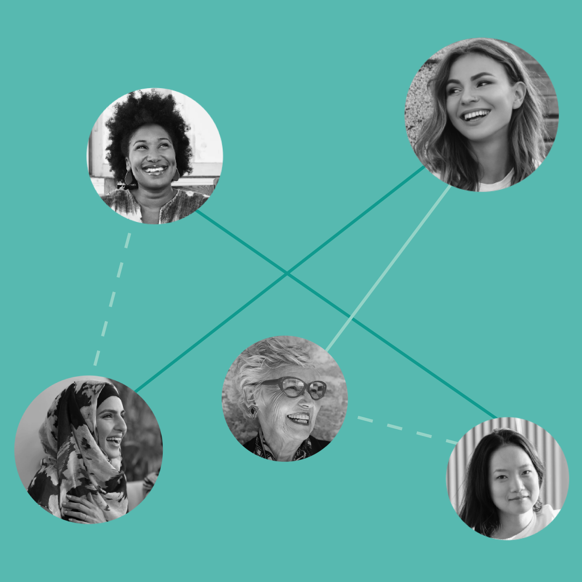 So … knowing that you should network is step one. But step two is actually making it happen. That doesn’t always come naturally for everybody. Maybe you’re a natural introvert. Maybe it feels spammy or pushy. Maybe you’ve tried and gotten nowhere. Read on for our best tips to make networking more comfortable, more effective, and more fun (that’s right — we said “fun”).

Networking is about finding people and professional opportunities you vibe with. You don’t want people to think you’re something other than exactly who you are, because the best opportunities are the ones that will fit your real self perfectly. And your real self is fabulous. So you can totally do this.

It’s natural to be nervous, especially if you’re the kind of person who’d rather be curled up on the couch with a book than out and about, talking to ~strangers.~ (Raises hand.) Don’t feel like you have to dive into this whole networking thing head-first. You can start small.

Morra Aarons-Mele has some great techniques to help introverts feel more comfortable out there. For example, if you’re feeling overwhelmed at the idea of an evening-long networking event, commit to meeting three people, and then give yourself permission to go home. Or use her “ten touches” rule, in which she reaches out via email or note to ten people a week. Or pretend you’re playing yourself in a movie — or, why not, pretend you’re Oprah! — to help you feel more confident when you walk into a room or strike up a chat.

We’re not about to tell you to memorize an “elevator pitch” about yourself. (Because that’s stuffy and that runs the risk of making you feel not like you. And who needs the pressure to say it all perfectly?)

What you might do instead is have a handful of go-to things you like to include when you introduce yourself or talk about how you spend your time. We don’t mean bragging — more like interesting tidbits and asides.

Get creative with these nuggets. What do you want people to know about you? Take an inventory from the people you work with today and ask them to describe you using three adjectives — are those the adjectives you want people to think of when they think about you? If the answer is “not quite,” then what can you add to conversation that can direct those perceptions more purposefully?

Remember: Networking goes two ways. You’re on the lookout for doors opening toward your own goals, but so is everyone else. So the more value you can provide to the people you meet, the more your acquaintanceship or friendship with them will flourish. Plus, they’ll see you as a valuable resource, and it will make you feel good (and see yourself as a valuable resource) in the process.

So ask people how you can help them meet their goals. Recommend a book. Offer to introduce them to other people you know who can help, even if it’s over email or on LinkedIn.

When people are nervous, we tend to stop fully listening. We start to plan out what we’re going to say next before the person has even stopped talking. If you can keep yourself from doing that, it will be your networking superpower.

A good first step is to really pay attention when someone tells you their name. Repeat it back to them so they know you heard them. And then do your best to remember it.

Asking more questions is also a great tip for anyone who’s not big on small talk. Most people tend to like talking about their experiences because it’s what they know best. So the more questions you ask, the more they’ll like talking to you, and the more you’ll learn about them (which can really come in handy later if you want to send them a follow-up note).

6. Talk about things other than work

Yes, networking tends to be more of a professional thing. And yes, it’s really easy to start a conversation with, “So, what do you do?” But … yawn, amiright?

Try kicking off with a different kind of ice breaker. Something like, “What’s your latest passion project?” or “What do you do for fun?” or “Have you read any good books lately?” They’ll remember you and your conversation better for it.

Not all networking is in person! Reaching out to people you know (or once knew, in a past life) via LinkedIn, email, etc is a 100% valid form of networking. Send them a link to an interesting article, see how they’ve been lately, or comment on something they posted.

Online networking is awesome: You have all the time in the world to plan out what you’re going to say. It’s fast and flexible — you can even do it while you wait in line at the grocery store. Also, you don’t have to wear pants, which is always a plus.

(Btw, a lot of people feel like it’s spammy when they get LinkedIn requests from people they don’t know. So it tends to be better for follow-ups rather than cold intros. Meeting new people via LinkedIn groups can be cool, though.)

No — do not lie in the middle of the road like Noah and Allie. “Play in traffic” means once you meet somebody, stay in touch. Stay out there. Don’t follow a great intro conversation with silence.

Maybe this means keeping a list of people you’ve met recently, what you talked about, and the last time you spoke — then going in every so often and reaching back out to them. Or maybe you scroll through a designated folder in your inbox (or your LinkedIn messages) every once in a while to hit reply. Or maybe you just make an effort to reach out to one person every day.

It doesn’t have to be a lot. Just a quick note to let people know you’re thinking of them.

Online networking is great, and playing in traffic is great, but there’s something sparkly and special about meeting up in person to keep the momentum going. For situations like that, let coffee be your secret weapon. It can take as little as a half hour, and even the non-caffeinated among us can order a scone or hot chocolate. It doesn’t have to cost much, or anything at all if you’re just there to chat. It’s flexible and it’s low-key.

(Just beware of the overdone “Can we grab coffee so I can pick your brain?” thing. That’s actually asking for free advice, rather than offering a connection.)

If you’re more on the introverted side, the idea of swapping some of your usual alone time for … well … not-alone time might sound less than ideal. So make a deal with yourself: For every hour you schedule to go to a networking event or catch up on emails and / or LinkedIn messages, schedule a different hour for some you time.

If you aren’t already putting that alone time on your calendar, this might even be an added bonus. Hello, purposefully scheduled self-care, nice to meet you.

Not sure where to start? Professional networking groups can be an awesome choice. Maybe you find one that’s open to anyone. Or maybe you join one for women. Or one for your industry. Or one for people who do the same job as you. There’s no wrong way to go about it — if there’s one that interests you, go for it.

They usually work one of two ways: You might you pay an annual membership fee or dues, and then meetups and events are free or inexpensive. Or it might be free to join, but the events cost a bit more. (It isn’t free to rent a space and get refreshments, turns out.)

Alumni networks are also a great place to interact. A lot of bigger schools will have local chapters in cities around the country. But if you don’t live near one of those, see if there’s a LinkedIn or closed Facebook group you can join. (Internet for the win, once again.)

Like we said before, networking doesn’t always have to be uber-professional. There are lots of ways to meet people, especially if you’re trying to branch out to different social circles. Think things like yoga studios, book clubs, and co-ed community sports teams. A quick search for Facebook events near you might help you find some that interest you.

Try to avoid building a big network filled completely with other people who look and think a lot like you. The more diversity we can bring into our circles, the better. More diversity means more perspectives, more connections, more opportunities, and more things we can learn and experience.

So make a point to connect with people unlike you in industry, ability, sexual orientation, gender identity, race, economic background ... you get it. Your career (and life) will be richer for it.

15. Build a personal board of directors

One of Sallie’s favorite pieces of career advice is to build your own personal board of directors — a set of people who, whether they know one another or not, are your go-to folks for professional guidance.

Think of it as a team of mentors and sponsors who would be there for you if you wanted to chat through a potential job change, or a career risk, or another big decision. They can cheer you on and tell you how awesome you are, but also help you see things from an outside perspective. And maybe advocate for you if they get the chance.

Let’s break the serious taboo women feel about pitching themselves, their skills, and their offerings. Let’s give one another our business. Men have done this since the dawn of time — they scratch each other’s backs, they do their buddies a favor, they throw business their way. What could our careers look like if we didn’t feel like it was a breach in something precious to ask our friends to support us like that?

And finally, remember that your personal board of directors isn’t the only group who can help you get ahead. Research has shown that when men network in all the ways we just mentioned, it helps them get ahead. But not so much for women. Instead, what helps women is if they do all this networking stuff and have a small inner circle of other women they’re close with. That’s because they’re more likely to connect one another with opportunities that are a good fit, both in terms of skill and workplace culture. So build that squad.

It’s this strength in numbers that can help us women come together and lift each other — and ourselves — up. Now: head held high, business cards at the ready. You got this.

Ask Sallie: Should I Join a Professional Network? (Video)