How to Make Your Voice Heard at Work

Maybe you have a ton to share at work, but you can’t seem to ever find an opening. (Argh.) Or nobody seems to take your contributions seriously. (Double argh.) Or other people keep taking credit for your good ideas. (Triple argh, with a half twist.) Or maybe you’ve been asking for a raise for a while now, but your paycheck’s the same as it ever was. (Volume-eleven argh, on loop.) 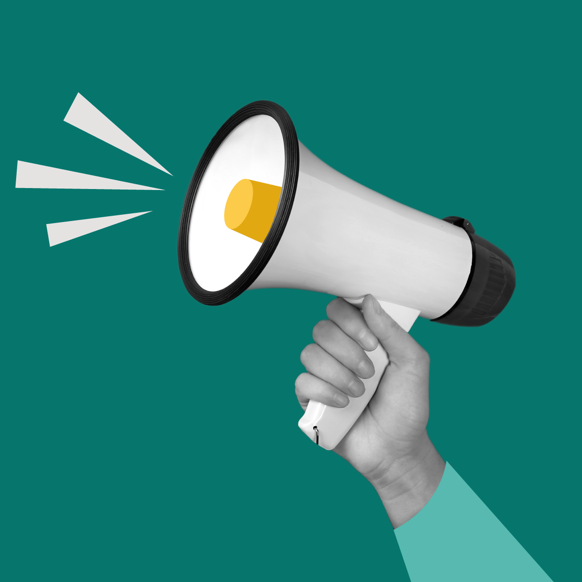 If what you’ve been doing just isn’t working, what can you do? Here’s our best advice if you aren’t being heard at work.

This above all else: Whether it’s a raise or a new project or more resources or whatever — show them the numbers. If you can frame it in terms of results, you’re more likely to have people pay attention.

Lately, I’ve been thinking about how we can [do the thing] better. I ran the numbers, and I think if we [followed this strategy], it could lead to [a good result] and potentially [more revenue].

And as a sample script:

Lately, I’ve been thinking about how we can drive more market growth. I think if we were to increase ad spend by $1,000 a month, it could lead to 6,000 more clicks and potentially 100 more conversions.

If you aren’t sure how to find the numbers, you could touch base with someone from your company’s finance or accounting team. (They’re probably very nice people, and smart too.) They’ll most likely be more familiar with your company’s profit margins and things like that. See if they can help you map your request back to the company’s bottom line in terms of dollars and cents.

If numbers don’t quite work for your situation (it happens), are there are any major non-number initiatives that matter to upper management right now? Can you connect your request to something like that?

Lately, I’ve been thinking about how we can [do the thing] better. I [did some relevant research], and I think if we [followed this strategy], it could lead to [a good result] and potentially [solve the problem upper management cares about].

Lately, I’ve been thinking about how we can help more kids at our school get interested in STEM subjects. I did some research on extracurricular activities, and I think if we were to organize a once-weekly after-school science club, it could end up with dozens of students attending and potentially higher grades in math and science.

TL;DR: Be explicit about how your ideas will move the needle. Managers like moving needles.

Use only as many words as you need

If you’re early in your career, you might still feel nervous speaking up at meetings. Nerves lead to nervous rambling. And nervous rambling tends to lose people and make you seem less confident — even when you totally know what you’re talking about.

So just before you give people your thoughts or contribute your ideas, take a deep breath. Then speak with composure and be succinct. Once you’ve made your point, end it there. Leave people thinking, “Wow. Well said.”

The good old practicing-in-the-mirror technique can really help you get better at the speaking-with-composure-in-the-moment thing. Or you could have a friend ask you questions about your job and practice delivering the answers. Remember: You know your stuff better than anyone else. You got this.

Speak up, but listen too

To make your voice heard, you need to talk about the things that really matter. And the best way to figure out what really matters is to really listen. Even as you’re breathing deeply, pay attention while other people are talking — or you risk missing something important that affects your idea.

Think about people’s opinions and info, but also about their word choices and facial expressions, especially upper management. What might they mean by the way they phrased that? What are they not saying? Can you tell what’s really important to them by the topics they come back to again and again? Use those observations when you think about how you’ll phrase your ideas or requests.

So you’ve run the numbers, framed the idea, taken a breath, and didn’t throw away your shot … and you got a vague “maybe” or “interesting idea, thanks” in return. The next step is follow-up.

You can do that within the conversation with a response like, “Does that sound like it could work?” If you get a yes, the next question could be, “Great! What do you see as the next step in making that happen?” If you get an “I’ll have to think about it,” follow up later with some urgency: “I’d love to get started on this project. Did you have any questions or see any issues with my approach before I take the next step?”

Professor Nicole Gugliucci introduced “hepeating” in 2017 to describe that thing where a woman has an idea in a meeting that gets ignored, but then a man says the same damn thing and it’s the greatest idea since goat yoga.

You can speak up yourself and ask Hepeat Pete to clarify how his suggestion is different from the one you introduced. You can also rely on strength in numbers on this one. In the early days of the Obama Administration, the women staffers got together on a simple but effective amplification strategy: “After one woman offered an idea, if it wasn’t acknowledged, another woman would repeat it and give her colleague credit for suggesting it.” Love.

Speaking of strength in numbers: We recently shared a bunch of networking tips to help you connect with people outside work. But networking at work can be really valuable, too, to help you each understand how you might work together to a common end (be it a new project or amplification of one another’s ideas).

This kind of networking’s pretty low-lift in person: Just ask if they want to get coffee or lunch with you. Or go for after-work drinks, if that’s cool where you work. Or see if they just want to take a walk outside to get away from the computer. And ask questions about their job along the way.

Say no to office housekeeping

We wish this was not advice we have to give … but it is. Women often end up taking on the “office housework” — things like taking notes or planning office parties, which tend to be “non-promotable” work. Office housework takes up time you could be using on the “promotable” stuff, like sharing ideas and info on business priorities. The worst part? Women tend to be penalized more than men if they say no to office housework, and they don’t get as much positive recognition as men do if they say yes. (Gross.)

If you truly like to do the thing, do it … occasionally. If not, say no. But to avoid being penalized, phrase your “no” in terms of of actual business results. “I’m sorry, Mr. Manager, but a lot of my time is going toward [a business priority] right now and I wouldn’t want to divide my attention too much — [said business priority] is super important to hitting [important goal].”

Talk to your manager

All the tactics we’ve shared can be effective to make your voice heard — but there’s one person who’s actually paid to listen to you: your direct manager. Make it a point to talk to them about how you’re feeling. No matter how that talk goes, their response will be illuminating.

If you’ve got a good manager who cares about your development, you’ll get some insight about why your requests are falling through the cracks. Maybe there are shifting company priorities you didn’t know about. Or your manager might steer you toward a company norm you weren’t aware of, like saving comments until the end or running all ideas past smaller groups rather than in big meetings.

They might also have constructive feedback about other areas of your job you need to address first — it’s pretty hard to get new ideas taken seriously if there’s some unaddressed issue with your day-to-day performance, after all.

They might even have been genuinely unaware you weren’t being heard — either because you’re pointing out their own bias or because they haven’t been in the conversations where it’s been happening. A good manager will take your feedback as their own action item if so, and either change their behavior or work to advocate on your behalf.

And maybe you’re doing everything right already, but you’re just in the wrong place. If your manager evades your question, gets defensive, or doesn’t give you feedback, or if other people are being listened to while you’re not … it might be time to say goodbye to that job. At a certain point, it’s not you — it’s them, and you’ll be better off taking those amazing ideas somewhere they’ll be truly appreciated.