What Women Can Do About Divorce Inequality

Usually, a 40–50% chance seems … significant. 40% chance of rain: Umbrella goes in the purse. 40% risk for men of developing cancer someday: Get checked out once a year. 45% chance that the 2017 hurricane season was going to be “above average” (hi, Harvey and Irma): Officials told people to make potential evacuation plans and stock up on supplies — like, right away. 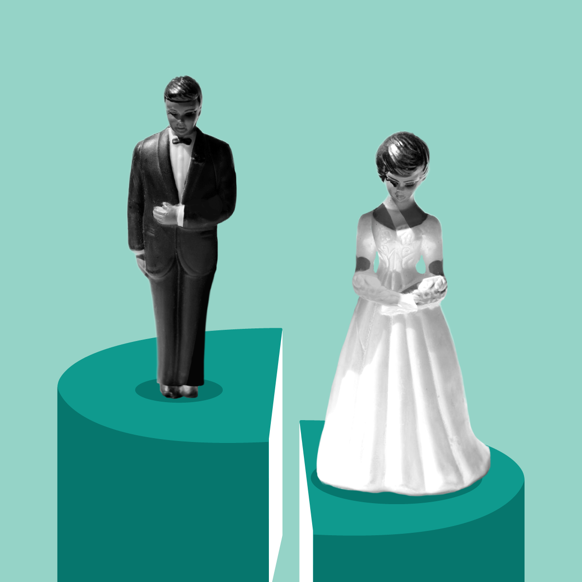 Well, there’s a 40-50% chance of a marriage ending in divorce. And one of the strongest of the many, many money taboos out there is the one where even considering a future in which your marriage doesn’t work out is defeatist and unromantic. (Yes — this is a money taboo. Marriage nearly always entails some mixing of finances. And being pressured not to plan for the possibility that you might need to un-mix those finances someday? Money taboo. 100%.)

Meanwhile, if you go full Girl Scout for the worst possible outcome and don’t get divorced, then mazel. But if you do get divorced, you’ll be glad you prepared. Because divorce affects straight men’s and women’s finances differently — and women take a bigger hit.

The Pew Research Center says that in 69% of heterosexual marriages, husbands make more money than their wives do. (That stat’s moving in the right direction, but we still have further to go.) So if those couples get divorced, the woman’s total household income is going to drop more than the man’s.

And Worthy, surveying nearly 1,800 women at varying stages of divorce, found that the vast majority of respondents felt like they had to focus on the short-term rather than planning for their future: 44% said their current top financial concern was paying off debt, and 72% of respondents did not choose “saving for my retirement” as a main concern. Considering the fact that waiting to invest can cost you, on average, $100 a day*, that’s not good.

When parents get divorced, women usually become the primary caregivers. Custody of children is a privilege that most mothers would undoubtedly deem worth it. But researchers at the Center for Retirement Research at Boston College found that being the primary caregiver tampers a woman’s earning power (sigh) and increases household costs.

Raising kids tends to be … expensive. To name a few things, there’s childcare, extra groceries, medical costs, after-school and summer activities, potentially private school tuition, and often college. And while child support is a thing, the law says that those payments are intended to cover “basic living expenses that are ‘reasonable’ and necessary for the child’s upbringing.” That might not be enough to pay for all the things you want to provide for your child — in which case your ex-spouse is probably not legally required to help out.

Also, divorce proceedings are intended to divide up a couple’s existing assets, but the law doesn’t account for the reduced earning power that often (and frustratingly) comes from splitting attention between full-time parenting and a full-time career. In fact, according to the Bureau of Labor Statistics, the 2017 unemployment rate for women with young children whose marital status is “married, spouse present” was 2.6% — but for mothers with any other marital status, that jumped to 9.9% (not a typo). Also, according to Census data, the median income of women living with family members but “no husband present” went down by 0.5% between 2016 and 2017, while the median income for women overall actually increased … by 0.2%. (Which like … still. Why.)

59% of women in Worthy’s survey said they were “met with surprises” during their divorce, and 48% said they happened after the divorce was finalized. These surprises were things like high mortgage interest rates on the house, or the size (or lack thereof) of the couple’s investment portfolio. In another study, a full 77% of divorced women and widows said they’d been hit with financial surprises like secret accounts after their marriages had ended.

Getting blindsided about things like a fixed monthly cost can keep you struggling for a long time after a split. And finding out you don’t have as much put away for your future — especially if you’re part of that 72% of divorcing women who can’t prioritize retirement right now — can leave you scrambling to catch up for even longer.

We can do something about that last one

One study found that 56% of women “deferred” to their spouse on investment decisions and financial planning. And in that Worthy study, 22% of respondents said that they’d “relinquished all responsibility” in managing their family’s long-term finances while married. Less than ideal.

So let’s do that math: 90% of women manage their own money at some point in their lives, 40–50% of marriages end in divorce, and … more than half of women defer to their spouse on money decisions. Oof.

We have to be involved. We have to talk about money regularly. (If you aren’t sure where to start, here’s a guide to having those convos.) We have to know what we have and where. We need to carefully, thoughtfully consider a pre-nup, without feeling like we just put the whammy on our marriage’s future. We also need to have our own savings. It’s called an Individual Retirement Account for a reason, after all.

The good news is that regularly checking in on finances is actually good for marriages: In one survey, 78% of couples who talk about money every week said they’re happy, but only 50% of couples who talk money “very infrequently” said they’re happy. So maybe it’s time to flip the script on money and marriage: The thing that should signal that a marriage is doomed isn’t the pre-nup talk, but the failure to have the pre-nup talk.

And we need to prepare for the possibility that a marriage will end, whether that looks likely or not. If you’re in the “not” category, here are some steps you can take today, while things are good, to make sure you’re taking care of yourself down the line. And if you’re on the other side of it, we have something for you, too: Here’s our advice for making sense of your money after a divorce.

Source Ellevest. To calculate “on average, $100,” we compared the wealth outcomes for a woman who begins investing at age 30 with one who began investing at age 40 after having saved in a bank for 10 years. Both women begin with an $85,000 salary at age 30 and all salaries were projected using a women-specific salary curve from Morningstar Investment Management LLC, a registered investment adviser and subsidiary of Morningstar, Inc., which includes the impact of inflation. We assume savings of 20% of salary each year. The bank savings account assumes an average annual yield of 1% and a 22% tax rate on the interest earned, with no account fees. The investment account assumes an investment with Ellevest using a low-cost diversified portfolio of ETFs beginning at 91% equity and gradually becoming more conservative during the last 20 years, settling at 56% equity by the end of the 50-year horizon. These results are determined using a Monte Carlo simulation—a forward-looking, computer-based calculation in which we run portfolios and savings rates through hundreds of different economic scenarios to determine a range of possible outcomes. The results reflect a 70% likelihood of achieving the amounts shown or better, and include the impact of Ellevest fees, inflation, and taxes on interest, dividends, and realized capital gains. We divided the calculated cost of waiting 10 years to invest, $341,181, by 3,650 (the number of days in 10 years). The resulting cost per day is about $93.47.

The results presented are hypothetical, and do not reflect actual investment results, the performance of any Ellevest product, or any account of any Ellevest client, which may vary materially from the results portrayed for various reasons.

You may or may not have noticed that we linked to creditcards.com for information about how womens' credit scores are disproportionally affected by divorce. FYI, LinkOffers, Inc (“Solicitor”) serves as a solicitor for Ellevest, Inc. (“Ellevest”). Solicitor will receive compensation for referring you to Ellevest. Compensation to the Solicitor will be $10 per membership activated. You will not be charged any fee or incur any additional costs for being referred to Ellevest by the Solicitor. The Solicitor may promote and/or may advertise Ellevest’s investment adviser services. Ellevest and the Solicitor are not under common ownership or otherwise related entities.

In Love? What You Should Still Know About Divorce