My husband and I were having sushi — outside, socially distanced, on a block with a handful of restaurants, with the dining rooms and all the buzz relocated to the street, with the weather slightly cool and a woman nearby playing a guitar and singing. Best evening since early March, hands down. Maybe of the whole year.

And then my daughter called.

I think when and how you found out that Ruth Bader Ginsburg had passed away could become one of those touchstone moments, the ones where we remember where we were and what we were doing. (“We were having sushi on Amsterdam Avenue and there was almost a carnival-like atmosphere,” we will tell our grandchildren.)

It certainly will be for me.

I mean, what that woman did for us. For women, yes; but also for all of us. 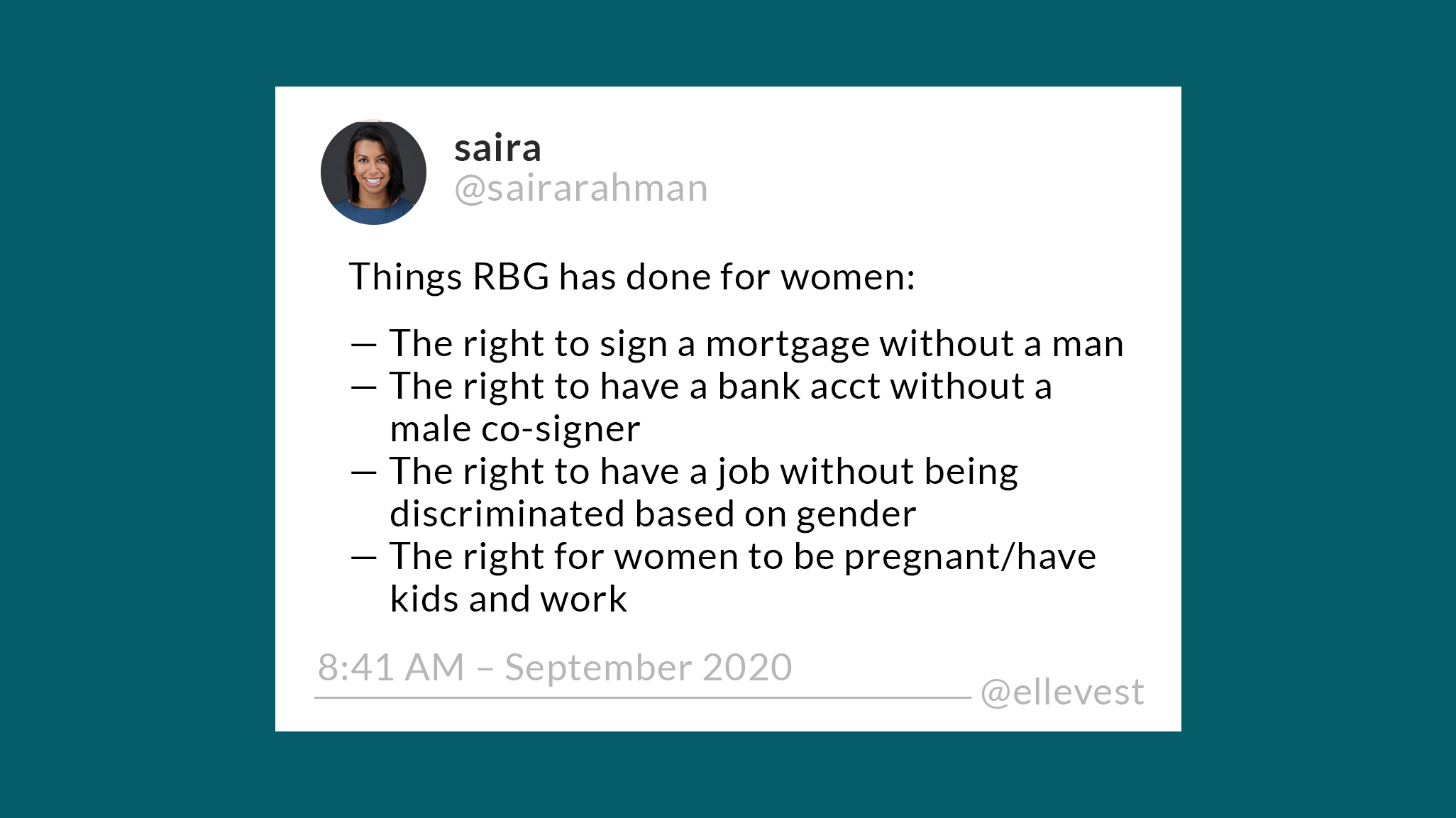 The fight for financial equality was at the core of RBG’s work.

Also, what an example of a life well-lived: to become excellent at something that you love, and to use that expertise in service of making your country a fairer place. The icing on the cake is that she did it at the highest level of her profession and she got there against all odds. (Can you imagine being the dopes who turned her down for a job after her graduation?)

I’m seeing so many people follow up their tributes to RBG with an exhortation to keep her fight alive.

They go on to say that we all must vote. And, yes, definitely: Vote. As we worry that her passing may mean an erosion in women’s rights, definitely vote.

As I’m worrying about the future of women’s rights, I can’t help but remember: In “The Handmaid’s Tale,” one of the first things they did in taking away women’s power was to take away their access to their money.

I often think of investing, of caring for yourself financially, of getting your budget under control, of bringing in more money than you are spending, as acts of self-care. Actions that strengthen each of us.

In my darker moments, I also think of those same acts — of investing, of caring for ourselves financially, of getting our budgets under control, of bringing in more money than we are spending — as subversive acts. Actions that strengthen each of us, certainly; but also acts that strengthen all of us ... while upending traditional gender roles.

As RBG herself acknowledged in a New York Times opinion in 2016, the work is far from done:

“... one must acknowledge the still bleak part of the picture. Most people in poverty in the United States and the world over are women and children, women’s earnings here and abroad trail the earnings of men with comparable education and experience, our workplaces do not adequately accommodate the demands of childbearing and child-rearing, and we have yet to devise effective ways to ward off sexual harassment at work and domestic violence in our homes. I am optimistic, however, that movement toward enlistment of the talent of all who compose “We, the people,” will continue.”

But not unless we make it so. As she did.

60+ Stats About Women and Money