You’ve probably heard of the gender pay gap. 83 cents to a man’s dollar. It’s a common stat (with 9.2 million search results on Google, as of this writing), and for good reason. It’s a big problem. But actually … it’s only part of the problem. 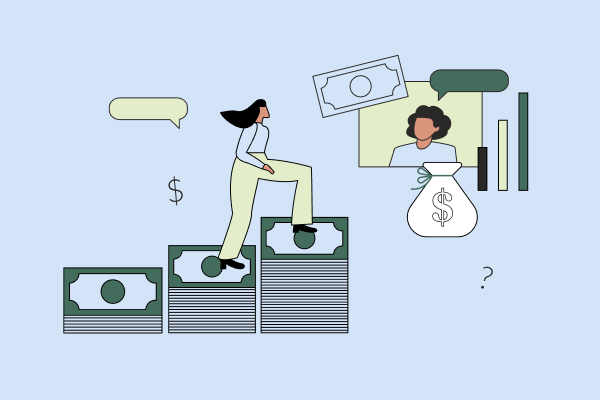 The more important but lesser-known gap (only 31,000 hits on Google) is the gender wealth gap. Not how much women make compared to men, but how much they own and keep. How much they have. And it’s way bigger than the gender pay gap.

Let’s talk about it, shall we?

How big is the gender wealth gap?

The most commonly referenced reports are a few years old now, but they say that for every dollar a white man owns, women overall own just 32 cents. Black and Latinx women? Just one penny. (And that was before the pandemic-induced She-cession.)

That said, it’s hard to pin down exactly how big the wealth gap is, for a couple of reasons. First, a person’s wealth changes over their lifetime, so age can skew the results — a 22-year-old with student loans probably has a lot less wealth than a retired widow who owns her home. Plus, most wealth data is collected at the household level rather than an individual level, meaning many women’s wealth data is mixed in with a male partner’s. (One analysis from 2021 that tried to look at the gap at a household level found that women’s median household wealth was 55 cents to every dollar of a man’s median household wealth.)

But no matter how you slice it, one thing’s for sure: The gender wealth gap is massive.

Why is the wealth gap so big?

Because financial inequality hits women’s wallets in so many different ways.

Because of all that stuff above. Wealth is the more holistic measure of inequality because it takes into account things like investments, emergency savings, debt, inheritances, etc — all of which are huge contributors to a person’s long-term financial stability and power.

Also! The gender wealth gap is a stronger indicator of future inequality. It takes money to make money, as they say. And it’s expensive to be poor. The gender wealth gap acknowledges that financial equality isn’t just about the money you have now — it’s also about your capacity for making things better for your descendants in the long run, how you’re able to save and create stability for future generations.

Plus, even if the pay gap disappeared, women would still be at a serious economic disadvantage thanks to centuries of legal oppression, especially for Black and Native American women. See: slavery, Jim Crow, being denied land sovereignty, unequal access to education, redlining, and modern-day inequities that all affect who gets to build wealth and how.

How to fight the gender wealth gap

Like racial injustice, and climate change, and world hunger, the gender wealth gap is a systemic issue, and it will require systemic answers. Individual action can only go so far. But of course, we fight.

Things everyone can do

Things men can do

Things women and non-binary people can do

Here’s the thing. Actually, several things. Women are better investors and invest in things that are better for the world (which also happen to be better for bottom lines). Who knows what more women+ investors could mean for the market in the long run?

Women run better businesses. Diversity makes companies more profitable, less risky, and more innovative. Studies also show start-ups with at least one woman founder perform better. In times of crisis, women-led companies have tended to weather the storm better. So getting women into positions of power where they’re able to create and maintain wealth is a win-win.

True gender wealth equality has been demonstrated to lead to better economic growth and development outcomes. Women also tend to reinvest a lot more of their income into their families and communities. So women’s prosperity is demonstrably good for everyone.

So yes, we should close the gender pay gap. But we can go so much further than that. Let’s keep our eyes on the real prize: closing the gender wealth gap.

Banking products and services are provided by Coastal Community Bank (“Coastal”), Member FDIC, pursuant to license by Mastercard International. Your Ellevest Spend and Save Account deposits will be insured to the regulatory limits by the FDIC through Coastal Community Bank, Member FDIC. Funds held in your Ellevest investment accounts are not FDIC insured, not guaranteed by Coastal, and may lose value. Ellevest does not guarantee investment performance.