The gender investing gap. If Ellevest had an arch-nemesis, that would be it. Sure, we’re also concerned about the pay gap — how much money women are able to earn is a major factor in determining how much money women have (aka the wealth gap, an arguably even larger point of concern). But investing? That can be the difference between “having a great job” and “having a great future.” And historically, for a whole host of reasons, women haven’t been able to do nearly enough of it. (That’s literally why Ellevest was started.) 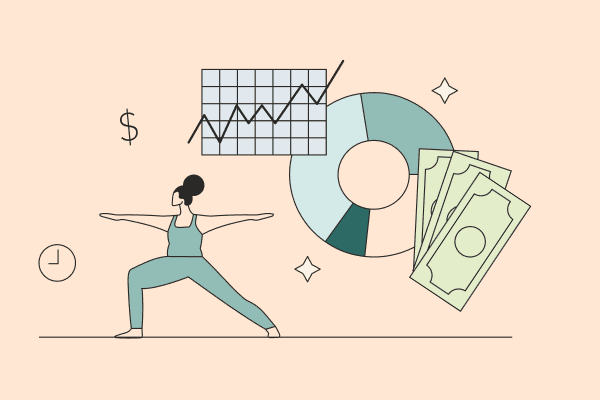 Here’s what you need to know about the investing gap, why it matters, and what we can do to close it for good.

What is the gender investing gap, exactly?

Unlike the pay gap or the wealth gap, the gender investing gap isn’t a financial measure of inequality so much as a measure of cultural failing. And it’s one that, in turn, impacts how much money we have (and are able to pass onto future generations) overall.

Put simply? Men (aka cis men) invest way more than women (and everyone else).

Women, data shows, tend to keep as much as 71% of their assets in cash — savings accounts, checking accounts, under the bed … anywhere but investment accounts. And that gap is even more compounded by race: Another survey published just last year found that 59% of Black women and 48% of Latinas haven’t invested at all, compared to 34% of white women and 23% of white men. And nearly twice as many white men (63%) as Black women (32%) reported having a retirement account.

Why does the gender investing gap exist?

Let’s go a little deeper on those.

Investing and banking are male-dominated

Most studies and surveys dealing with the gender investing gap just declare that women “don’t invest” — like it’s our fault, like we just … choose not to. 🙄 Instead, consider: The financial sector is so male-dominated, so male-oriented, so male-designed, of course men invest more than women.

The financial world is overwhelmingly, suffocatingly male. 86% of all financial advisors are men. 98% (!) of dollars invested in mutual funds are managed by men. Also see: Reddit meme stocks, The Wolf of Wall Street — even the Charging Bull statue outside the New York Stock Exchange. Masculinity abounds in finance, and it can be toxic.

Women are paid less. Full stop. But also, women spend less time in the workforce. Both of those things mean fewer opportunities to invest. It limits the amount of money we’re able to invest for retirement or other goals, and it breaks our earnings growth streak — it’s hard to keep gaining on par with men if you have to drop out of and reenter the workforce.

And that’s white-collar jobs. 95% of low-wage workers — predominantly people of color btw — don’t get paid leave (let alone a 401(k)). If you’re in a low-wage job and you have a baby, or you get injured and have to take time off, you’re basically forced to quit your job. And then comes the second shift: The New York Times estimated that the unpaid labor performed by American women in 2019 was worth roughly $1.5 trillion at minimum wage. That leaves less time for, ya know, the paid labor part of their lives. (Not that women should work all the time, but a lot of men do, which widens the gaps.)

Plus, even when women are earning, they often need to spend more on their families. In order to do so — especially in emergencies, like, idk, a pandemic? — you need your savings to be liquid, aka in cash. (We have a strategy we recommend to combat this, but more on that in a second.)On top of all that? The pink tax is very real, and not just for razors.

Taken as a whole, these are a lot of lost dollars that, if they existed, might make all the difference in closing the gender investing gap.

Women are made to believe they’re “bad at money”

Not to go all “we live in a society” on you, but one huge reason women don’t invest as much is because, for a long time, we simply weren’t allowed to. White women couldn’t even get a line of credit without a man as recently as the 1970s; women of color have been held back even more violently via oppressions like enslavement, Jim Crow, and denial of land sovereignty.

But even now that we are allowed to build wealth, our culture actively discourages us from it with toxic messaging. We’re told we’re bad with money (we’re not), we “spend frivolously” (we don’t), and that we’re risk-averse (we’re risk-aware). From a very young age, girls are taught money — and more to the point, investing — is too complex for us to understand. As a result, money has become women’s #1 source of stress, so much so that it affects our physical well-being. No wonder so many women don’t even bother.

Why does the gender investing gap matter?

Bottom line: Keeping savings in cash rather than investing it is a losing game. While the stock markets have historically gained an average of 10% annually, savings accounts earn virtually no interest, even in the long run. So with inflation, the purchasing power of money in savings actually decreases over the years.

On the other hand, we have so much to gain by closing this gap. A lot of studies and surveys have found that when women do invest, we do so more thoughtfully — and successfully — than men. We tend to trade less (which is risky, especially when done a lot) and invest more consistently, which has historically led us to better returns.

Women also report being interested in impact investing more than men, which according to reports, often drive better financial performance. Intentional, ethical investing seems to be a smart financial move, and women investors in general seem to have figured that out faster than men.

But it’s not just women’s portfolios that stand to benefit from closing the investing gap, — it’s everyone’s. One recent report estimated that if women invested as much as men, the industry’s total assets under management could grow by a jaw-dropping $3.2 trillion. If that’s true, who knows what else having more women investors could mean for the market in the long run?

So … how do we fix the gender investing gap?

For starters? Pay women more. And stop telling women they’re bad at money. And treat women like the massive part of society they are, with their own needs when it comes to financial services. (Hi, we’re Ellevest.)

In theory, it’s that simple. But in practice, we know it might not be. (Otherwise you’d probably have done it by now, right?) Your situation is unique, so where you start depends on where you are now. Here are the steps we recommend.

If you’ve ever fixed your own garbage disposal with nothing but a wrench and some YouTube videos, you know: Most of the things men try to gate-keep with jargon and illusions of complexity … aren’t actually that complicated. Investing is no different. And the sooner you start, the more opportunities you’ll have to build wealth and grow the future you want for yourself.

The investing gap is closing, slowly but surely — all you have to do is decide to start.