All the Jobs Were Lost by Women of Color

Including that headline last Friday, which stopped me short. You, too, probably: 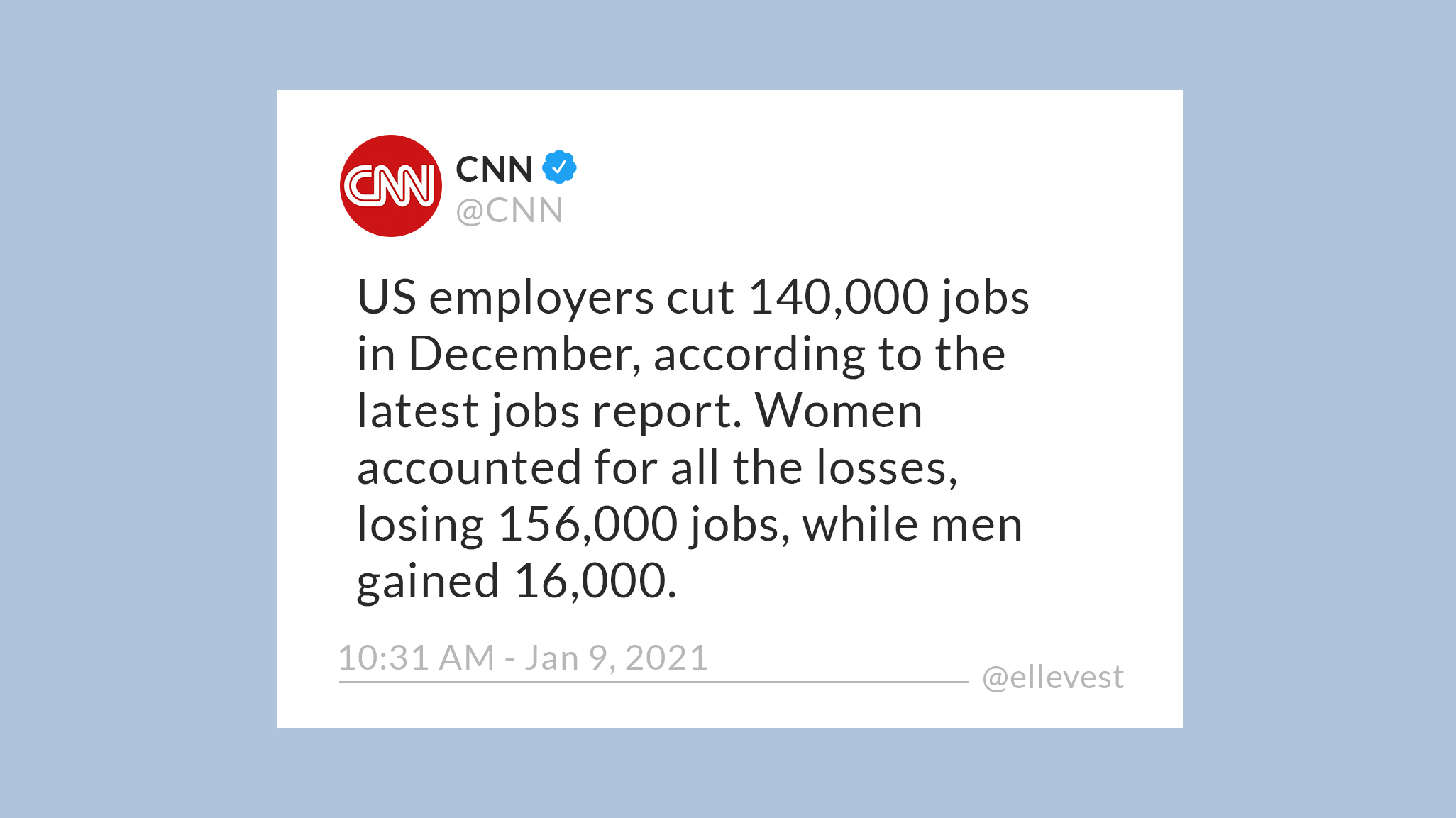 “US employers cut 140,000 jobs in December. Women accounted for all the losses.”

It sounded unreal. Especially coming so close after the violence at the Capitol, the whole thing felt a little “Handmaid’s Tale.”

But the headline wasn’t the whole story.

The story goes on to say that in a separate survey of households, men and white women actually gained jobs overall.

Those numbers aren’t all apples to apples — the survey included self-employed people while the employment numbers do not — but it’s still clear that these jobs were overwhelmingly lost by Black and Latinx women.

This she-cession is showing up in two different — and devastating — ways.

There are the women who are being sidelined from jobs for lack of child care. We saw them in the 865,000 women who left the workforce after school started last September.

And there are the women — mostly women of color — who make up the bulk of workers in the hospitality, education, and government fields. Last month’s job losses were mostly in those industries, which suffered as the pandemic raged out of control. Many of those losses are likely to be permanent.

Here’s where we stand right now:

Moreover, a lot of these women have been out of work for most of the pandemic, with 40% of all unemployed women having been out of work for six months or more. And that doesn’t even count those who have left the workplace entirely and aren’t looking — either because they know they can’t find work or because somebody has to take care of the kids.

Scary because this pandemic is still going on. And because even when it ends, its effects on women and children are still going to be felt, likely for a long time: it is expected that the average gender wage gap will be widened by two points for decades. The longer women are out of work or not as productive, the wider that gap will get.

And let’s face it: “Recovery” to the place we were before this all started isn’t enough. It’s time (as sociologist Jessica Calarco put it) for the “ungaslighting” of the extra labor that Black and Latinx women and mothers are doing to hold our society up, which functions as our safety net — and which hurts us all.

But here’s the good news: We’ve got a record number of women coming to Congress — and women are more likely to introduce laws that help women. We’ve got a leader in the White House who is both a woman of color and a “Mommala.”

It’s time to really acknowledge these issues and prioritize fixing this.

Women Are the Social Safety Net