Why You Need a F*ck-You Fund

The roommate from hell. The toxic ex. The dead-end job. The creepy boss. Plenty of us know what it’s like to be stuck in a terrible situation — especially women and non-binary folks — and not have what you need to escape. We’re talking money, of course — money, also known as autonomy, power, the ability to walk away.

Enter: The F*ck- You Fund. Allow us to explain. 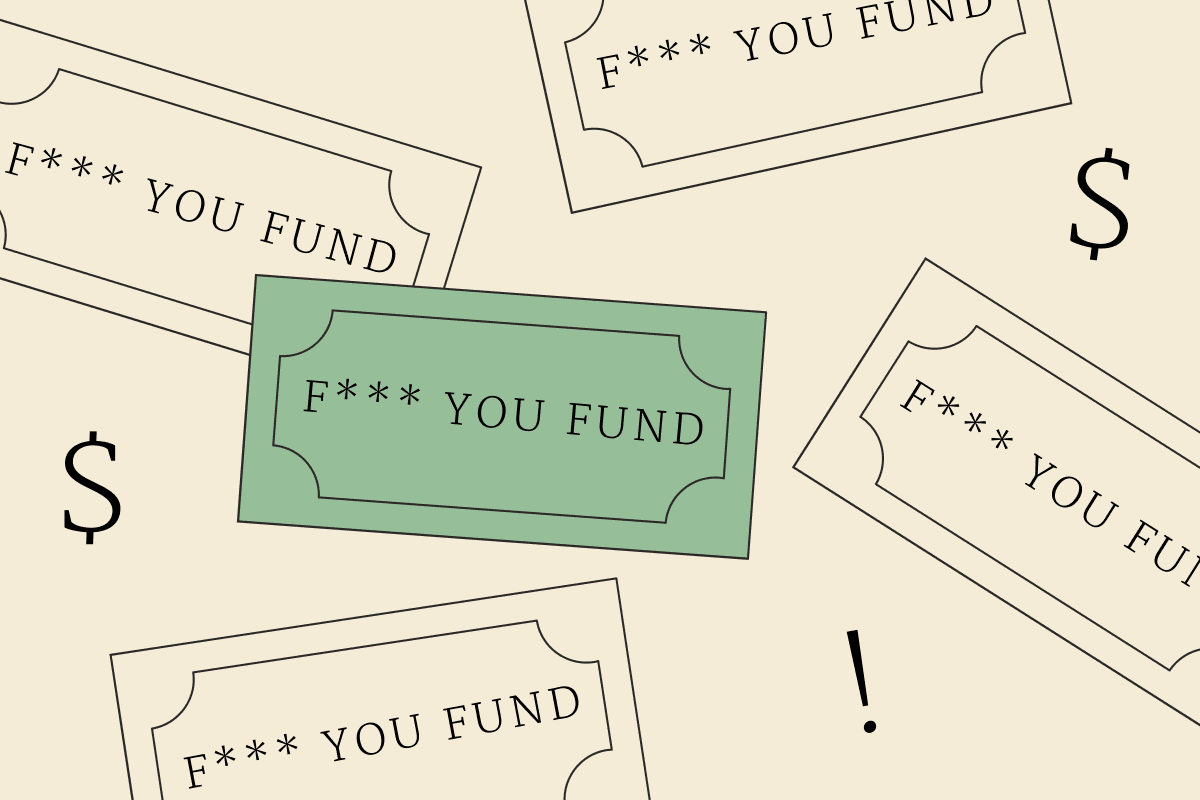 Once upon a time, way back in January 2016, writer Paulette Perhach published a piece on the personal finance website The Billfold (RIP) called “A Story of a F*ck Off Fund.” It described, through an elaborate choose-your-own-adventure-style story, why a young woman might want to start saving early and aggressively, to stay independent of horrible situations like abuse or harassment. While financial security certainly wasn’t a new concept, “money = the power to say ‘f*ck off’ and bail” was a somewhat novel framing. (Plus it feels great to say.) Naturally, it went viral.

Since then, the concept has also colloquially been referred to as “f*ck you money,” or, as we call it, a “F*ck-You Fund.” A F*ck-You Fund is a savings pot you build up specifically so you can walk away from the things that hurt you or hold you back, be they people or environments (or both). While there are plenty of reasons a vulnerable person wouldn’t be able to leave a bad situation, the idea is that nobody should be trapped or exposed to harm just because of money. (And research shows that a lot of women and other vulnerable people are.) A F*ck-You Fund is designed to eliminate the financial barrier from a person’s list of reasons.

Isn’t that just an emergency fund?

Yes and no, for the same reason that a square is a rectangle, but a rectangle isn’t necessarily a square. An emergency fund is for emergencies — as in something unexpected, like getting laid off, or getting slapped with a $10K vet bill. A F*ck-You Fund, by contrast, should be available even when it’s not an emergency. Your “f*ck you” moment could be an emergency — like escaping an abusive situation — but it doesn’t have to be. You should still be able to dip into it, even if you just … feel like leaving. (Inappropriate comments from a boss might not be enough to call it a crisis, per se, but it could be a big enough red flag to decide to GTFO.)

If you want to save for both your emergency fund and your F*ck-You Fund in the same account, you could! But that’ll just mean it can’t be a bare-minimum amount (see: the lower end of the three to six months’ take-home pay range) — the more you save, the more confidence you can have going into any job or relationship or lease without having to worry about how you’ll get out, should you need to.

So how much should I save?

Start at the emergency fund threshold — three to six months’ worth of take-home pay, aka what you’d need to pay all your bills. If you’re self-employed, best to be extra-safe — go with nine months. If you’re not sure, think about it this way: What would you need to feel comfortable? How regular / stable is your income? Do you have a partner’s income to back you up, or are you holding down the fort yourself? How easily could you get another job (or freelance in the meantime) if you had to?

Then add some! There’s no strict rule or formula to follow, so just … do more. (After all, one of those stability factors in the paragraph above might be the thing you’re telling to f*ck off.) Maybe you started with three months’ pay for your emergency fund — go to six months. Or maybe from five months’ to seven. Maybe you’d feel best with a full year of take-home pay. Here’s the key question: What amount would make it easy for you to walk away without a twinge of fear? To leave, without feeling pressure to open a new credit card or ask a loved one for a loan? (Those are some of those situations we’re trying to avoid.) To say “f*ck you” and find something better?

Where should I save my F*ck-You Fund?

Since this is a savings goal you may need at a moment’s notice, we suggest keeping it, like any other type of emergency fund, liquid — aka not invested, aka in an account you can draw from at any time with minimal penalty. A high-yield savings account could be a good option.

The one caveat here: While it may behoove you to save for other goals in an account you can’t see when you check your everyday balances (ie where you won’t be tempted to draw from it for frivolous reasons), this one you might actually want to keep in an account that’s routinely visible. That’s because the whole point of a F*ck-You Fund is to know it’s there, to let that money pile comfort you, to know you can leave whenever you need to. If you put it in an account that isn’t in view all the time, you might be less inclined to wield it.

“F*ck You” is just the beginning

A F*ck-You Fund is powerful, but it’s just one of the tools on your journey to financial freedom. Zoom out, and this is all part of a bigger plan to set your future self up for security and success. Considering the pay, investing, and wealth gaps — and the fact that women live longer than men (74% of women die single) — it benefits us to save and invest as much, and as early, as we can. Still, if you have to start somewhere, or if you need some inspiration to keep building toward that future, you could do worse — and a lot less fun — than a F*ck-You Fund.

Here’s What You Need to Know About Emergency Funds