At Ellevest, we believe that we all have the power to lift ourselves and each other up financially.

But we aren’t going to sugar-coat it: Women, people of color, people with disabilities, members of the LGBTQIA community — we all have to push harder, especially when it comes to money. 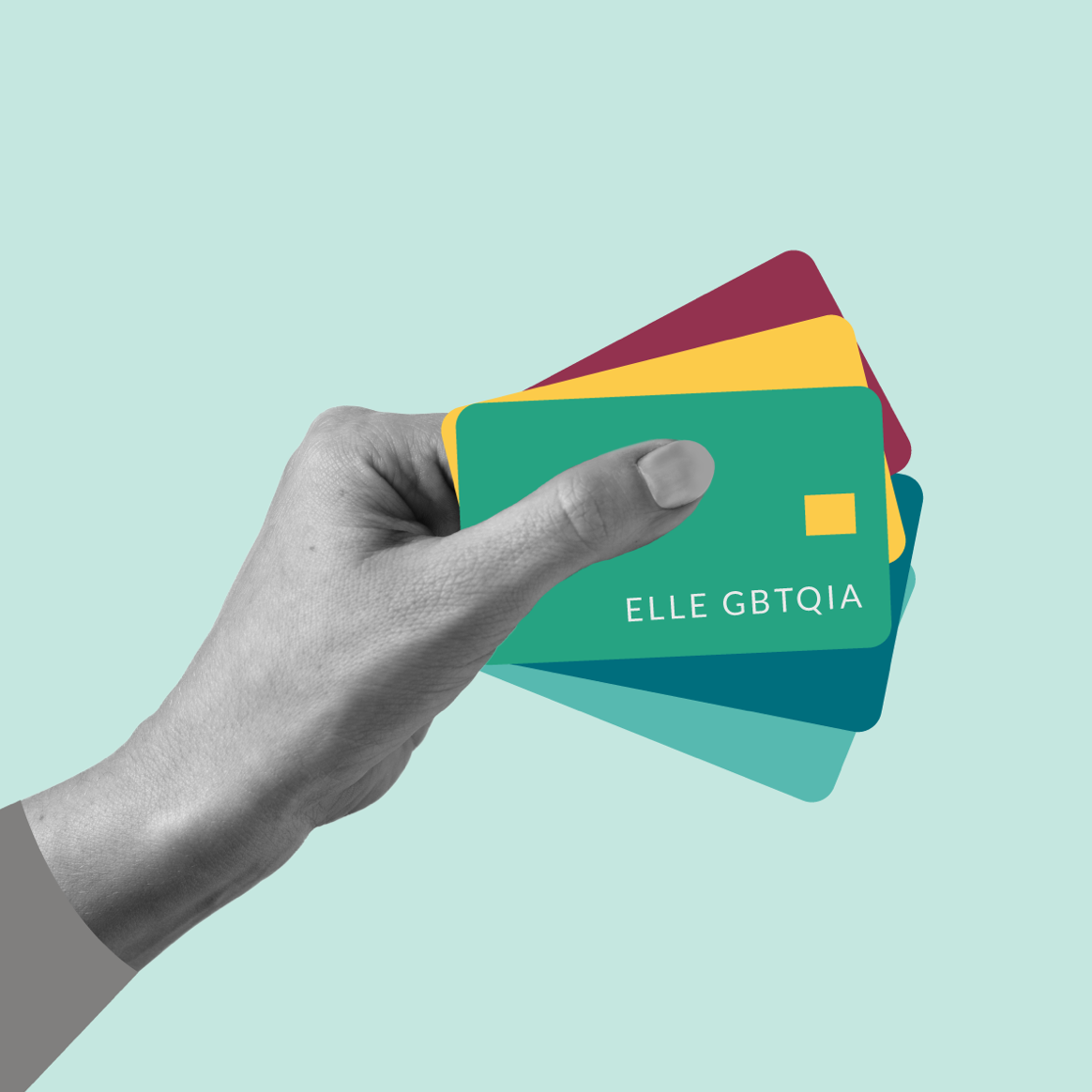 LGBTQIA people don’t necessarily have a different path to financial security, but those of us in that community often have a more challenging path than those of us with straight or cisgender (cis) privilege. So we aren’t here to offer an out-of-touch, falsely cheerful message that if you just follow our advice, then ~you too can overcome your challenges and solve all your money problems.~

What we are here to do is help you take steps in the right direction. Because no matter where you start, there are always things you can do to move forward.

Here are four things LGBTQIA people and allies can do today.

1. Push for pay equality, for yourself and others

As a society, we talk a lot about the gender pay gap. Sometimes we even break it down by race. But by sexual orientation or gender identity? Not often. This is partly because that info hasn’t historically been collected in “official” places like the US Census, whereas racial identity info has.

We definitely need more research. But in a survey conducted for USA today, researchers found a 12% pay gap between “LGBT” millennials and straight millennials. And another study found that transgender women see a 32% drop in pay after transitioning. That’s like going from a salary of $40,000 to … $27,200.

So what can we do?

First, of course, is advocating for equality in our workplaces. We can refer LGBTQIA people for great jobs and make conscious hiring decisions if that’s part of our role. We can act as mentors or sponsors for LGBTQIA people. And we can ask directly for more inclusive policies to be implemented.

We can also do our part to create safe, welcoming workplaces that help everyone feel comfortable bringing their entire selves to work. For example, we can normalize the act of sharing our pronouns with others by listing them in our digital profiles and mentioning them when we introduce ourselves to others. Research shows that when people feel like they belong at work, they’re more productive, more engaged, and three and a half times more likely to contribute fully.

And we can use strength in numbers by helping each other find great job opportunities, whether at our own companies or elsewhere. One study found that when men had large professional networks, it helped them get jobs. But those networks alone didn’t help women — what helped was also having a small inner circle of friends who are all looking out for one another. It seems like this approach might be able to help the LGBTQIA community find better jobs, too.

And, of course, we can walk into our own salary conversations fully prepared — with data on our industry, our performance, and our needs. We love Ladies Get Paid founder Claire Wasserman’s three numbers to have in mind when you ask for a raise (especially the “FU number” 😉).

Feeling financially secure is a prerequisite to feeling safe. And strengthening your financial base is step one. The less certain your income is (re: above), the more helpful this base becomes.

In Experian’s 2018 LGBTQ Money Survey, 62% of respondents said they’d experienced financial challenges — things like discrimination or harassment at work, lower salaries, and being passed over for a job — because of their sexual orientation or gender identity. The transgender community is even more affected. The most recent US Transgender Survey (USTS) found that compared to the general population, the unemployment rate is three times higher for transgender people. And the poverty rate was twice as high. And the effect is even more severe for transgender people of color and transgender people with disabilities.

There’s also housing discrimination and a potential lack of support network to contend with. In the USTS, 23% of people said they’d experienced some form of housing discrimination in the past year. And in Nancy’s 2019 LGBTQ Money Matters Survey, 35% of people said they could rely on family and friends for financial support before they came out, but only 20% said they could after.

So here’s what to focus on first

Know what’s coming in and going out

Even if you feel like you’re barely keeping your head above water — perhaps especially then — the very first step is to tally up how much income you have coming in and how much you typically spend each month. We know that might not be your ideal way to spend a free hour, but damn if it doesn’t feel great to finally get a bird’s eye view of this stuff.

Then, once you know where you are now, you can start to make a game plan for the future. Yes, this is kind of like budgeting, but no, it doesn’t have to be rigid or involve spreadsheets (unless that’s your thing). We recommend trying on the 50/30/20 rule for size instead. Traditionally, that involves directing 50% of your take-home pay to needs, 30% to fun, and 20% to Future You (saving, investing, and debt payments above the minimums).

But you don’t have to stick to the “traditional” breakdown (because pay gaps, and because expensive cities, and because life). If your approach becomes the 60/20/20 rule, or the 70/20/10 rule, or whatever — the important part, in the beginning, is just that you’re directing your money (not the other way around) and that you’re doing what you can to stash at least a bit of that money away for Future You. Then you can work your way up gradually.

Believe it or not, not all debt is terrible. Low-interest student loans, for example, could allow you to boost your earning potential (although, as frustratingly evidenced above, not as much for LGBTQIA people as for the general population) for a reasonable cost. But if the interest rate is high, like on credit cards, then it can really hurt.

So if you have high-interest debt (here’s some guidance on what’s “high”), you’re going to want to stop that hemorrhage ASAP. Here’s our advice on how to prioritize debt and work it into your financial plan.

Build that emergency fund, one dollar at a time

An emergency fund is there to catch you when you fall. And financial emergencies aren’t a matter of “if” — they’re a matter of “when.” If you don’t have a safety net, any progress you make could end up being one step forward, one step back.

We usually recommend saving between three and six months’ worth of take-home pay in your emergency fund. Whether it’s more like three or more like six depends on how stable and reliable your income and living arrangements are. Those stats up there ^^ about LGBTQIA people facing less financial certainty? Definitely relevant here. So take that into consideration when you decide what’s right for you.

And yes, we know that this might feel like a ton of money to save, especially if things are tight right now. But even if you can only set aside a little bit at the moment, that’s still great. It might also help to set smaller goals along the way — maybe aim for $1,000. Then one month’s worth of take home pay. Then two. Then three. Every dollar you add to that savings account makes you a little more financially secure.

3. Invest for your goals

For your biggest money goals that are a few (or more) years away — maybe retiring, putting a down payment on a house, having kids, etc — you’re a lot more likely to hit them by investing toward them, not by saving up cash. (Here’s why.) And for those of us in the LGBTQIA community, we can use every leg up we can get.

This is where goal-based investing can be really helpful. Say you need $20,000 in five years for XYZ dream purchase. Goal-based investing lets you put your money in a portfolio that’s just risky enough to allow it grow but also safe enough to not risk it too much. As you get closer to your goal date, that risk level can be adjusted.

You’d need a couple years of runway to make it work, but if other funding options or insurance aren’t available, transgender people could also use goal-based investing to fund major medical procedures or transition-related expenses. (We don’t have a goal specifically titled for that purpose at Ellevest right now, but we totally encourage you to customize the goal amount and target date for one of our other goals to help you get there.)

And then, of course, there’s retirement (if you want to retire, that is — it’s not for everybody). For a lot of people, it’s the biggest money goal (in terms of dollars) that they’ll save for. We have a bunch of resources to help you learn about investing for retirement and why it’s important to start sooner rather than later. And if you're an Ellevest Plus or Executive member, we have an investing goal for that, too. Especially if the pay gap and workplace discrimination start us even further behind.

Employers in the majority of the US are still legally allowed to fire people for being LBGTQIA. (And it happens, despite evidence showing that “LGBT-supportive employment policies” have tons of benefits for employers, like better job commitment and workplace happiness from employees.) Many states fail to protect LGBTQIA people from housing or credit discrimination, too. We have to change things.

Here’s a pretty striking map that shows where LGBTQIA people do and do not have legal protections for general employment, state employment, housing, public accommodations, and credit. So sign petitions. Call your representatives. Vote. The ACLU website is a great resource to learn more about how you can get involved with LGBTQIA and other social justice initiatives.

The road is probably going to be bumpy. But all great change starts with small steps forward. That, and a community of like-minded people who can help lift one another up — because #strengthinnumbers.

Describes a person whose gender identity matches cultural expectations for the sex they were assigned at birth.

Describes the range of other people someone is romantically or sexually attracted to. Examples include homosexual, heterosexual, bisexual, and asexual.

Describes a person’s sense of self in terms of gender. This may or may not match the sex they were assigned at birth. Examples include woman, man, and non-binary (neither man nor woman, or a blend of both).

Describes a person whose gender identity or expression is different from cultural expectations for the sex they were assigned at birth. A transgender person may or may not take steps to medically transition to another gender.

Smart Money Moves for Every Age