The Money Talk: The One Where They Compare Salaries

Not-so-fun fact: 61% of women say they’d rather talk about their own death than have a conversation about money. That’s some societal money taboo BS, and we’re ready to change that. So this is The Money Talk, a series in which we’ll be answering example* questions about how to kick-start important money convos.

I’ve been spending more time lately thinking about the gender pay gap, and I’m wondering how much it affects me personally. I’m planning to do some online research about typical pay rates in my field, but I also want to compare salaries with other people. 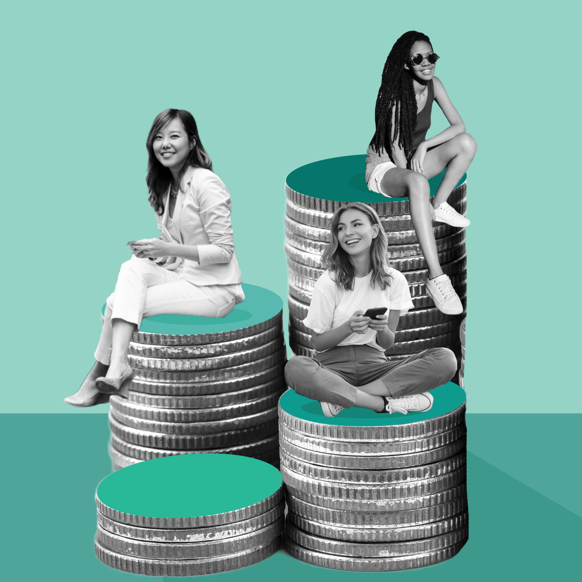 We love that you want to start having these conversations. The more we normalize the convos (because money talk taboos are real, y’all), the easier it will be to figure out if we’re getting paid fairly. And the easier it is to figure that out, the more prepared we can be when we put on our [insert your preferred confidence-boosting clothing item here], go in there, and ask for the raise we deserve.

Here’s a sobering fact: As of right now, it will take an average of over 40 years to close the gender pay gap — but 107 years for Black women and 216 years for Latinx women (!). Plus, progress has pretty much stalled. And that doesn’t just affect women today — your salary now is the jumping-off point for all your future raises. So when we start behind, we stay behind.

Here are some helpful resources to help you with that internet research. And here are some ideas to help you kickstart your salary convos. (PS: Talk to people of all gender identities. Because wage gap.)

A salary conversation starter with people at your company

While we’re 100% here for the idea of comparing salaries with as many people as possible, it can feel weird to do that with people you work with right now. And if you’re (dare we say it) being overpaid (we hope you are), you wouldn’t want to risk exposing that and jeopardizing future raises.

So instead of comparing salaries with coworkers, you might focus on gathering company-wide data instead. This is where the human resources department could be helpful, or maybe your boss.

A lot of companies have “salary bands” for different positions at different levels — someone with X years of experience or a certain level of performance would typically make between $Y and $Z a year. If you can understand those bands at your company (and where you fall within them), then you can ask how to move yourself up.

Here’s a way to broach the subject with a manager or HR person:

“I’ve been reading about what other companies are doing to help address employee questions about pay parity. Do we have anything in place here? For example, do we use salary bands to determine compensation?”

And if you find out that there aren’t any measures like that in place at your company, see if there’s a diversity or women’s council who could help push for them. Multiple voices are more powerful than one alone.

A salary conversation starter with people in your industry

Outside of your company, the best salary info is going to come from people who work in the same industry as you.

So think former coworkers, mentors, and other people you’ve met along the way who work in your industry (or, even better, in a role similar to yours). Networking is one way to find those people. (That can be in person, but it can also be online, like in industry-related LinkedIn groups.) Here’s a conversation starter you might lead with:

“I was wondering if you might be open to talking about salaries with me. Can I tell you how much I make, and you can let me know if you think that sounds reasonable for our industry?”

A salary conversation starter with friends

It might feel a little more comfortable talking about salaries with your friends. Even if their work experience isn’t quite “apples to apples” with yours, this info can serve a slightly different purpose.

When you talk to other people in your industry, you’re looking for solid salary numbers. But comparing experiences with your friends can give you insight into how much they’re getting per raise as an average percent of their salary. You can also learn how often they ask for raises, how often that worked out for them, and the negotiating techniques they’re using.

Here’s an idea to break the salary ice with your friends:

“When you started your job, did you negotiate your salary? I did/did not, but now I’m wondering if I’m being paid fairly. Would you be willing to talk salaries with me so that I have more context?”

In a recent survey of more than 500 creative freelancers, there were some ... interesting … results about the rates they charge. Among them:

Here’s some handy advice on setting your freelance rates from the bottom up. And here’s an idea for bringing up this conversation with others:

“I recently read this study that said women freelancers charge half as much as men do. Isn’t that wild? It made me curious about the rates I’m charging for my own work. Would you mind if I shared that with you? I’d love to hear your thoughts on whether I’m charging enough.”

Sincerely,
The team at Ellevest

Note: The person asking the question in this article isn't real. We made her up so we can show you the kind of tough money talks people sometimes struggle with. In other words, this is a hypothetical scenario that doesn’t represent any Ellevest client, and it’s by no means individually tailored advice.