How Inflation Changed in October 2022 (and What to Do Now)

Earlier this week, we learned that in October 2022, inflation rose by 7.7% compared to this time last year.

The good news is that’s slightly lower than the 7.9% analysts expected (a fact that the stock market celebrated). It’s also the second month in a row that the inflation rate has eased. But we’re still hovering around decades-long highs, continuing a long climb that started in late 2020. 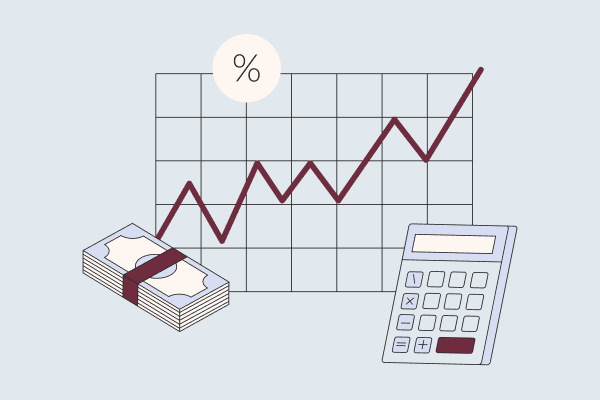 So what drove last month’s change in inflation, and what should you do with your money in times like these? Let’s break it down.

First: How is inflation measured?

Inflation is the upward creep of the prices of goods and services. It usually happens because the demand for goods and services is rising faster than companies can produce and supply them. That makes them more scarce, which makes them more valuable, which pushes prices up. When wages don’t rise to match, that creates a decrease in purchasing power. (Translation: Things cost more and you’re not making more, so you can’t buy as many things.)

Inflation is often measured using a standard benchmark like the Consumer Price Index (CPI), which you might have heard of. The CPI is calculated by looking at a standard set (“basket”) of goods (food, medical care, clothing, etc) and averaging their change in price over time.

How did inflation get to this point?

Several things have driven inflation over the past year and a half. (TL;DR: increased demand, decreased supply.)

Why did inflation ease in October 2022?

Well, prices on used cars and clothes fell, which economists have been waiting to see for months. Medical care costs also dropped some, as did things people buy (mostly) for fun like plane tickets and tickets to live sports. On the flip side, the main things still driving inflation up are housing costs, food, and energy.

It’s the Federal Reserve’s job to manage inflation, and one of the main ways it can try to do that is by raising the federal funds rate. (Here’s an explainer on how that helps.) The Fed has hiked rates six times so far this year; they’re now higher than pre-pandemic levels. The Fed is also expecting to raise rates by another 0.50–0.75% in December, with more almost certainly to come next year as well. This month’s good CPI news, plus the fact that housing sales have slowed way down, has people hopeful that the Fed’s efforts are starting to work.

The tricky part will be slowing inflation without sending our economy into a recession (commonly called a “soft landing”). Fear that the Fed will get it wrong is one of the main things driving all of the recent stock market volatility. That said, even if we don’t go into a full recession, a slowing economy is inevitably going to be painful in the short-term — as evidenced by all the recent layoffs by major US companies.

Analysts will be keeping a close eye on what happens next. Right now, wages are still growing (albeit more slowly than they were before), which could precede an increase in prices for things like child care, restaurant spending, and other services if consumer demand remains strong.

How should you manage your money right now?

It’s impossible to know what will happen in the future, but here are some things to think about.

Don’t keep more than you need to in cash

This is something we say anyway — but when inflation is high, cash gets less valuable, so the advice becomes even more urgent. High-yield savings accounts are paying healthy interest rates right now, but with the CPI so high, they’re still falling far short.

Here’s what we recommend always keeping in cash (as in, in an FDIC-insured bank account):

If you’re the kind of person who tips a little more toward “cautious” on the risk tolerance scale, you could consider adding a bit more to your emergency fund — if things are going to cost more later, your savings might not go quite as far.

But for the rest of your money, we typically recommend investing it.

If you’re investing for long-term goals (those more than a few years away), we’d probably recommend that you just keep doing what you’re doing. Every period of inflation is different, and in the past, it’s affected different types of investments in different ways (which is, after all, the point of having a diversified portfolio).

We do know (and as we’ve seen this year) periods of economic uncertainty tend to make the markets nervous, which can lead to volatility. So we recommend using a technique called dollar-cost averaging, which means investing regularly, a little bit at a time, no matter what’s going on in the market. You’ll end up investing when markets are up and down in a way that evens out over time. It takes the timing guesswork out of it.

Plus, we don’t know how long higher inflation will last — there’s always a chance that it could slow sooner than experts expect. Either way, the longer your timeline, the less inflation is likely to impact your eventual bottom line.

(By the way, when you invest with Ellevest, we take hundreds of different economic scenarios — including ones like this — into account as we build your forecast.)

Keep an eye on interest rates

As mentioned above, interest rates have risen a lot, and they could keep rising a little while longer. That’s made variable interest rates on things like credit cards go up, too. So if you can put a little extra toward your debt now, you probably won’t regret it.

TL,DR: We don’t know how long this period of higher inflation will last. All we can do is try to make the best choices we can with the information we have — and adjust along the way.

What’s Going on With Federal Interest Rates (and How Do They Work)?